Who was Charlie Christian and why is he the greatest guitarist of all time?

At 23-years-old Charlie Christian became the most innovative guitarists of his time. In the late 1930s guitars were used as backup instruments because they weren't loud enough. No one had thought about playing guitar as if it were a horn. It was never the lead instrument in a group of musicians.

Christian was the greatest guitarist of all time because he started using an amplifier to play loud enough to be the soloist of a group. We have Charlie Christian to credit for the evolution of music on the electric guitar. If it weren't for him, we'd all be listening to horns and I for one would have already blown my head off.

Can you imagine a guitarist like Tom Morello of Rage Against the Machine playing "Killing in the Name Of" on a saxophone instead of a guitar? 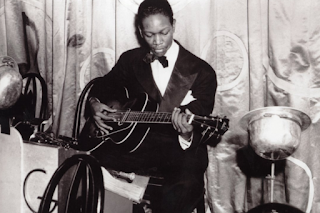 Note: No actual videos of Charlie Christian could be found.

Interesting fact: When he was 12-years-old Christian made his first guitar out of a cigar box.