Learn Guitar: 5 guitar techniques that will make you sound great

If you want to learn some cool guitar techniques, you are in the right place. If you are already fluent in playing chords and parallel guitar then you are confused about how you can develop your guitar playing skills, this is the right article for you. 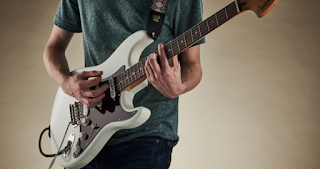 5 cool guitar techniques that you should know

Hammer-on and pull-off are pretty cool guitar techniques, because the sound they make is unique.
how to do a Hammer-on: first pick one of the guitar strings, for example the 1st string without any fret being pressed, then press it quickly and firmly on one of the frets on the 1st string using your fingers. then the sound of the guitar has two notes without plucking the strings twice.

How to do a pull-off: first press on one of the frequencies on string one as an example. then pick the 1st string, after the light sounds, immediately release the finger on the guitar fret quickly. then the guitar sound has the same two notes as the Hammer on technique but this is reversed.

This sliding technique will sound like playing a note from low to high or vice versa. how to do the sliding technique: namely by pressing on one of the conditions using 1 finger, then plucking the strings then sliding the finger from one fret to another.

Arpeggio is a guitar game that separates chord notes by strumming rather than playing them in one strum / genjreng.

To play a basic arpeggio, simply select one of the guitar Chords, then pluck the strings in order, not strung.

For the first time you do it in sequence, then you can improve this Arpeggio technique by trying to mix the sequence of the strings.

very suitable for songs with the Jazz genre. all you have to do is hit the 6 string or the top string with your thumb until it sounds "plaque". This slabbing technique is usually done after strumming or strumming the guitar. This technique is very simple, but it can produce a pretty cool sound.

For more details, see the video

The trick is to just touch (don't press) the strings on one of the frets above, then pluck the strings you touch, at the same time you immediately release your finger touch from the strings.
If the Harmonic doesn't come out, try to touch the strings just above the fret strips.

For example the video is as follows

These are 5 cool guitar techniques that you can learn to look good. The technical techniques above should be done in moderation, so that the technique looks natural and does not seem overwhelming and boring. Thank you for visiting atomicguitarist.com