Biography of Andy Summers - British Rock Guitarist of The Police

Andy Summers is a British guitarist, musician, and composer, internationally recognized for being the guitarist for one of the most legendary rock bands in history: The Police. 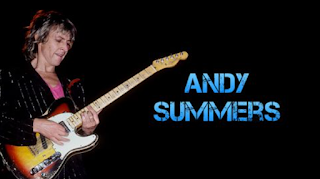 Andrew James Summers was born in 1942 in the city of Poulton-le-Fylde, England.

Starting his first musical studies at the age of 8, receiving piano lessons for several years, until he took up the guitar obsessively from the age of 13, beginning to play in local clubs with only 16 years old.

At the age of 19, he moved to London to found with his friend Zoot Money, the soul, jazz, and R&B band, "Zoot Money's big roll band", playing insistently at the Flamingo Club in London.

In 1967 the band would go to psychedelic rock and was renamed "Dantalion's Chariot". But the group disbanded in 1968, Andy joining for three months one of the most influential underground rock bands: Soft Machine.

To then move on to the group that at that time was called "Eric Burdon & The Animals", with which he would record the album "Love Is" in which Summers performs a guitar solo lasting more than four minutes on the song "Colored Rain «. Dissolving the group at the end of 1968.

In case the year of 1968 was not sufficiently moved for Summers, that same year he married his first wife, the singer Robin Lane, breaking up the marriage only two years later, Andy falling into a severe depression.

Andy Summers would spend five years in the city of Los Angeles, where he studied composition and classical guitar at Northridge University in California, returning to London with his legendary Telecaster, which I will talk about later, and with his American girlfriend Kate Lunken in 1973, marrying her that same year.

After his arrival in London, he participated in recordings and tours of numerous artists, including his participation in 1976, in an orchestral performance of the famous "Tubular Bells" by Mike Oldfield at Newcastle City Hall.

In 1977 he was part of the short-term project called "Strontium 90", which allowed him to meet Sting and drummer Stewart Copeland, who formed a group focused on punk trends very fashionable at that time, together with guitarist Henri Padovani. That group was called The Police, finally completing the quartet with Andy Summers.

Andy was 35 years old, taking almost a decade from the rest of the band members, being at that time an accomplished session musician who had rubbed shoulders with all the great guitarists of the time, unlike Henri's little experience. Padovani, creating conflicts between the two.

After a discussion with Henri, Andy proposes to Sting and Copeland, to dispense with Henri's services to create a band in power trio format.

Although Copeland initially disagreed with Summers' offer, Andy was supported by Sting by sharing influences and musical tastes, having his agreement for what should be the new orientation of the group, the band remaining in the definitive trio that would lead them. to the top of success.

Publishing the new band its first disc in 1978 (Outlandos D’Amour), with a varied mix of musical styles like reggae and rock; the essence of sound and unmistakable stamp of The Police.

The band started a clear ascent thanks to a really brilliant work on the entire album, and particularly on some songs that are still known worldwide today ("Roxanne", "So Lonely" or "Can't Stand Losing You").

In 1979 they would publish "Reggatta de Blanc". Definitively consolidating the fame of the band, thanks to an album that would take over the sales charts throughout Europe, which included excellent songs, some clearly recognizable as "Message in a Bottle" or "Walking on the Moon".

In 1980 they would release their third album (Zenyattà Mondatta), which also featured some of their most legendary songs ("Don't Stand So Close to Me" or "De Do Do Do, De Da Da Da"), the group triumphing also in the United States, reaching this publication number 5 on the Billboard.

In 1981 he continued the success with his fourth publication ("Ghost in the Machine") in which there would be no shortage of historical songs by The Police ("Spirits in the Material World", "Invisible Sun" or "Every Little Thing She Does Is Magic" ).

And in 1983 the final apotheosis would arrive with the last studio album that this extraordinary band would publish ("Synchronicity"). An album cataloged as one of the best masterpieces of the 80s and with an icon of the band, and of the music of the entire decade ("Every Breath You Take").

Incorporating a superb guitar accompaniment that tickles our ears for most of the song, remaining forever etched in the mind of anyone who listens to this song.

In 1984 the tensions and egos between the different members of the band, caused the dissolution of the trio, although the group would reappear in 2007 to carry out a tour (Police Reunion Tour) of 150 concerts that would take them all over the planet recalling the old successes of the band.

After the dissolution of The Police, Andy Summers would begin his solo career, making numerous studio publications.

Focusing mainly on instrumental themes, composing soundtracks for films ("2010", "Down and Out in Beverly Hills", "The Wild Life" or "Weekend at Bernie's"), collaborating with other bands and artists such as Robert Fripp, or even exhibiting his photographs, or writing books (One Train Later).

Andy has commented that he always liked the Gibson ES-335 because he used to listen a lot to New York jazz guitarist Grant Green. Although he admits to using the ES-336 more because it has a smaller body since the 335 is a bit cumbersome.

Another of his favorite guitars is a 1961 Red Fender Stratocaster that he bought in the city of Austin in Texas for a modest $ 400.

But his most iconic guitar is a 1963 Fender Telecaster Customized with a wide series of modifications, which made it truly exceptional.

In the neck position, it mounts a Gibson PAF humbucker pickup and in the bridge position a Fender Telecaster Original pickup.

Unlike the traditional bridge, mount a brass bridge with individual saddles for more accurate intonation.

It also incorporates a switch that activates a preamplifier powered by a 9-volt battery, and control that regulates the gain level of the preamp, with which you obtain greater sustain and saturation level as an overdrive pedal would do (Image below left ).

And a switch was also added that allows you to use the pickups in phase and out of phase (Image above right).

This guitar was offered to him in the early 1970s by one of his former guitar students when he was studying classical guitar in California.

After spending a long time without touching an electric, he begins to play with it and is fascinated, so much that according to Andy himself, it was difficult for him to stop playing it. Buying it to the student for what he asked; 200 dollars.

Over the years and after forming this guitar part of the sound of one of the most important bands of the 20th century, Andy looks for this student to reward him since he felt indebted to him. After finding the former owner of the guitar, he told him that he had already sold it for a price and that he did not owe him anything, rejecting Andy's succulent offer.

I would have offered Summers to buy it back for the money it cost him, just to see the look on his face.

Among the amplifiers he has used are:

- Roland Jazz Chorus JC-120 responsible for much of the Police's signature sound.

As far as effects pedals are concerned we find:

- and the Roland GR-300 Synthesizer

Andy Summers is an exceptional musician, with an unusual ability to master and merge different musical genres, demonstrating throughout his career, being one of the most complete musicians and guitarists in history.