Jimi Hendrix is ​​one of the guitarists who paved the way for other mortals. Listed by Carlos Santana himself, like the Leonardo Da Vinci of the electric guitar for his innovative capacity, ahead of his time. 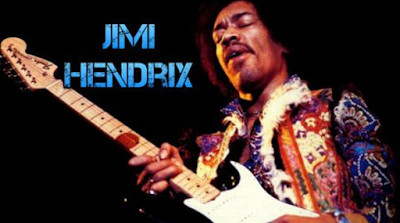 James Marshall Hendrix was born in 1942 in Seattle, United States. Cherokee blood ran through his veins from his mother and black blood from his father.

Starting to play the guitar at the age of 12, practicing like any amateur, playing on the music of his Blues idols like B. B. King, progressing with dedication and in a self-taught way.

After his time in the American army, he dedicated himself fully to music, becoming recognized already in his adolescence, as a great blues guitarist in the early 60s, playing with renowned bands such as the duo Ike & Tina Turner, even with one of his idols, B. B. King. Interestingly, Tina Turner's mother also has Cherokee ancestry, as does Jimi.

Despite Hendrix's renowned cache to be able to play with established bands, he needed freedom to develop his own music, and in 1964 he settled in Harlem (New York). By this time, Hendrix was already able to get into a club, join an impromptu band, and put on an impressive performance.

A year after his arrival in New York, he created his own band, Jimmy James & The Blue Flames, composed only of Jimi, a bassist, and a drummer.

Although his band was already beginning to be recognized, especially for Hendrix's talent, the financial situation was not very comfortable.

After the last tour of the United States of the British group The Animals, the bassist of the band Chas Chandler, witnesses a performance by Jimi Hendrix at the Café Wha in New York.

Surprised by Jimi's virtuosity, he offers to be his manager and travel to England. The only question Jimi asked was: Will you introduce me to Jeff Beck and Eric Clapton? Chas replied that it was okay, and they both went to England.

Eric Clapton, at that time, belonged to the band Cream, also made up of bass, guitar, and drums, being the leading brand in all of London, at that time. Known for the improvisation capacity of their components, especially Clapton, doing infinite solos with a musical style between Rock and Blues Cañero.

Such was their skill that in the streets of London they began to appear painted with the legend: "Clapton is God".

After taking Hendrix for only a week in the city, he attended a Cream concert and had the audacity to ask to improvise with Eric Clapton, the group being at the absolute peak in terms of improvisation techniques and fame.

Since Jimi came out with all his repertoire. He passed the guitar between his legs, behind his head, got on his knees, and played with his teeth. Eric was shocked, dropped his hands on his guitar, and left the stage. That day is known as "the day Hendrix killed God."

So Chas Chandler creates his own talented trio, with Jimi and two English musicians for bass and drums, to found the band The Jimi Hendrix Experience.

His songs were not long in reaching the top positions in the British charts.

Upon his return to the United States, Hendrix already became a myth after performing at the Monterrey Festival. And at the Woodstock Festival, no one wants to play after the Hendrix earthquake, being the artist who closed this mythical festival with his performance in 1969, after three days of performances by mythical groups.

Hendrix was an innovator when it came to using techniques to get new sounds out of his guitar and his 1959 Marshall amp, along with a Wah pedal. Totally new sounds, which at that time had not even been imagined.

Jimi was so innovative that he even made the famous Dive Bombs, being one of the pioneers in this technique. Although after doing a couple of these on a semi-floating bridge, the guitar would go out of tune quite a bit, that didn't stop Jimi, he gave a review of the tuning on the fly and herding.

Despite being left-handed, Hendrix preferred to play right-handed guitars. In this way, the controls and the vibrato lever were at the top.

Jimi used a number of different guitar models, such as the Gibson Flying V, which he called "Flying Angel" (flying angel).

But his main workhorse was the Fender Strarocaster.

Hendrix used to always use the amps to the maximum of what they gave, being almost always on the edge of the coupling.

Sometimes he would break or burn the guitar, or both. Something is not recommended to do because of the possibility of causing a fire in a place, but those years were very crazy.

These studios were used by artists like Bob Dylan, John Lennon, AC / DC, Guns N 'Roses, The Strokes, or U2. This gives away the category of this study, although Hendrix hardly enjoyed it.

That same year he traveled to London, and after a party, he died at the age of 27, as a result of a fatal cocktail of alcohol and sleeping pills.

46 years after his death, his songs continue to be covered, like "Little Wing", his little wing continues to fly high, covered by many artists such as Stevie Ray Vaughan, Sting, Kirk Hammett, and The Corrs among others. Playing it to Eric Clapton himself, to pay tribute to an electric guitar genius.