Jimmy Page is a famous rock guitarist, and multi-instrumentalist musician, known for being the founder of one of the most legendary bands in history: Led Zeppelin. 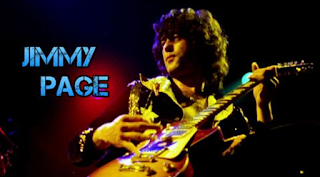 James Patrick was born in 1944 in Heston, within the London metropolitan area. At the age of 12, Page had his first guitar, and although he received some classes on the instrument, his training as a guitarist has been mainly self-taught. Something very widespread at that time, given the novel characteristics of the electric guitar. Each guitarist developing his own techniques, developed in turn by the influence of other guitarists.

Scotty Moore and James Burton, are among his early influences, both rockabilly guitarists, who had played with Elvis Presley.

While still a student, Jimmy often improvised at London's Marquee Club with guitarists like Eric Clapton or Jeff Beck, whom he had known since he was eleven years old.

Page achieved some fame in the recording studios, as a session musician, working with groups like The Who or The Kinks.

Page achieved some fame in the recording studios, as a session musician, and in 1964, Page received an offer to replace his friend Eric Clapton in The Yardbirds, although he rejected it as a show of loyalty to his friend.

Although a year later, Clapton would leave the band by his own decision, receiving Jimmy Page again the offer to be part of the group. But Jimmy again rejected the offer to continue his career as a session musician, as he did not feel ready to tour with a group yet, so he recommended his partner and friend Jeff Beck as Clapton's replacement.

As there are not two, without three, Page would once again receive the offer to be part of the Yardbirds, although this time it was a question of participating as a bass player replacing Paul Samwell-Smith, an offer that he would finally accept.

Shortly after he would end up playing the role of a solo guitarist with Jeff Beck, taking his place on bass Chris Dreja.

However, lack of musical success and internal conflicts cause Jeff Beck's departure from the line-up. Until in 1968, the group dissolved, and Jimmy Page founded The New Yardbirds. With Robert Plant as a vocalist, John Bonham as a drummer, and John Paul Jones as a bassist and keyboardist.

Shortly after the band would be renamed Led Zeppelin to avoid possible legal problems with the previous group.

The name Led Zeppelin had its origin in a recording session of a song by Jeff Beck in which they were among others Jimmy Page and the drummer of the Who (Keith Moon). The latter jokingly commented: "This project will fail and fall like a Lead Zeppelin." Getting Jimmy Page the idea of ​​this comment, for his new group. Later, the manager of the band would shorten the name to Led Zeppelin.

The experience acquired by Page as a member of The Yardbirds and as a session musician was noted in the new group, both in production and composition, as well as in innovative techniques as a guitarist.

And in 1969 they published their first self-titled album. Led Zeppelin. That same year they would achieve international success with their second album, Led Zeppelin II, being a sales success since its launch. Listed as a blueprint for Heavy Metal, and as one of the best and most influential rock albums.

The most successful track on the album was "Whole Lotta Love".

The following year, in 1970, they would release their third album, Led Zeppelin III. With a calmer character than his previous works.

After the tremendous shakeup of Led Zeppelin II, something more forceful was expected, and it was not very well received, although it is currently recognized as one of the best albums of the band.

The fourth album of the group would be published in 1971 and lacks a title, popularly named Led Zeppelin IV. Considered the best album of the group, being one of the best-selling albums in history, with hits such as "Black Dog" and the legendary "Stairway To Heaven".

In 1973 they published Houses of the Holy, opening the group to other styles such as reggae or soul.

In 1975 they released their sixth album Physical Graffiti. Favorite album of the members of Led Zeppelin themselves due to the musical variety that it integrates and with the great success "Kashmir".

A year later, in 1976 they published Presence and in 1979 the last studio album made by Led Zeppelin (In Through the Out Door) would be published. With hits like "Fool In The Rain", and "All My Love".

In 1980, John Bonham died in Jimmy Page's mansion due to alcohol poisoning. Causing the dissolution of Led Zeppelin.

Although Led Zeppelin did not meet again except in special circumstances, Jimmy Page's career as a musician continued to this day. Participating in countless projects and collaborations, both in-studio sessions and live, publishing a solo album Outrider, and even the soundtrack (Death Wish 2).

In 1994, Page and his Led Zeppelin partner, Robert Plant, reunited to record a concert for the MTV series "Unplugged". The special, renamed Unledded, did not feature John Paul Jones and was one of the network's most successful broadcasts.

Jimmy Page's way of playing the guitar notoriously influenced other musicians such as Johnny Ramone, admitting himself that the Heavy Metal-style sound of the song "Communication Breakdown" inspired the fast and powerful sound of the music. of his band.

For his part, according to Eddie Van Halen, the idea of ​​his style came to him when he saw Jimmy Page play the solo of "Heartbreaker" with one hand. Which led him to think about using both hands to press notes on the tuning fork, ending up developing and perfecting tapping techniques.

The modern techniques on the new instrument were quickly absorbed by the guitarists, and Jimmy Page was not going to be less. Confessing that the idea of ​​playing the guitar with a cello bow came to him after seeing his partner David McCallum using this technique, apart from previously used by The Creation guitarist, Eddie Phillips.

Page used this technique in songs like "Dazed and Confused", "How Many More Times", and in the introduction to "In the Evening".

Jimmy used a wide assortment of different guitars throughout his career. One of the best known is the famous Telecaster used by Jimmy Page at the beginning of his career, nicknamed "Dragon Tele". A 1961 Fender, given to him by Jeff Beck in 1966.

Although he had several Gibson Les Pauls, his favorite in this model was a 1959 Les Paul. Joe Walsh gave away.

He also had a 59-style Danelectro, which Page used to play live, the mythical theme "Kashmir", and which he used to tune in open D, for slide play.

The Gibson EDS-1275 Doubleneck inspired by the brand's SG model, is one of their most characteristic and showy guitars, due to its double-neck design. Used live to play such legendary songs from the band as "Stairway To Heaven".

The strings he uses are the Ernie Ball 2223 9-42 Super Slinky, even for short-scale models like the Les Pauls, and the same strings that AC / DC Angus uses for his SG.

The tines are the Herco HE211P Flex nylon.

As with most guitarists with a career as extensive as Jimmy's, he has used countless amps:

In effect pedals the assortment is also quite wide and varied:

Jimmy Page apart from playing guitar and bass, also plays the Mandolin, Banjo, Keyboards, Harmonica, Sitar, and Pedal Steel Guitar, among other instruments. And he contributed significantly to Led Zeppelin becoming one of the most legendary bands in rock music, as well as being one of the most influential guitarists in history.