Stevie Ray Vaughan has been one of the greatest Blues guitarists of all time, becoming one of the main references of Electric Blues of the 80s. Mixing the purest essences of the great blues guitarists, and the claw and virtuosity of his idol Jimi Hendrix. But he was not limited purely to this genre, also playing other genres like Rock and Roll, or Jazz, and fusion genres like Blues / Rock, and Jazz / Blues. 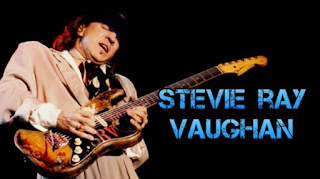 Stevie Ray Vaughan was born in 1954 in the city of Dallas, Texas. At the age of 9, he got his first electric guitar, and his older brother Jimmie began to teach him his first classes.

From then on, his only obsession would be to relentlessly practice the techniques of the great blues guitarists of the time such as B. B. King, Jimmy Reed, Otis Rush, or Albert Collins. And of course, Jimi Hendrix. Being fascinated during his adolescence by the virtuosity of the guitarist, becoming one of his main references.

At age 13, Stevie began to participate in school bands until at age 16 he founded his first band (Blackbirds). A year later he decides to leave his studies to dedicate himself completely to music and moves with his band to the neighboring city of Austin.

A city where his brother Jimmie already had some recognition as a blues guitarist and was the one that introduced him to Austin blues circles and clubs.

In 1974, Stevie purchased his famous, well-worn 1959 Fender Stratocaster in Austin. The «Number One«. Later we will see "number one" in more detail.

After participating in various groups, in 1978 he founded the band Stevie Ray Vaughan and Double Trouble.

In 1982, Stevie's manager gave a film of the band playing a festival to Mick Jagger, which caused the group to do a private performance at a Rolling Stones party.

Shortly after that, the band made the most important performance of their career, playing at the Montreux International Jazz Festival, Switzerland.

That same year David Bowie invited Stevie Ray to participate in the best-selling album Let´s Dance, published in 1983, leaving the Texan his stamp on songs of enormous diffusion such as "China Girl", "Modern Love", and "Let´s Dance ».

That same year, the band released their first studio album called "Texas Flood". The most successful album of Stevie ray and Double-Trouble's career. Full of Blues and Rock fusions, being a success since its publication in 1983.

With hits like "Rude Mood" and "Testify", two instrumental rock songs with a hellish rhythm. Or "Love Struck Baby", and "Pride and Joy", two rock and roll style songs.

And of course with his mythical version of the song "Texas Flood" recorded by Larry Davis in 1958. With which he won several awards, being one of his many songs showing his potential and claw in a traditional blues, but with a great punch the sound of his guitar, getting into Blues Rock sounds. All these songs mentioned above were played with "Number One".

In 1984 they released their second studio album, Couldn’t Stand the Weather, with a cover of a Jimi Hendrix song (Voodoo Chile), and a Jazz song (Stang’s Swang).

In 1985 they released a new album, Soul to Soul. In this recording the virtuoso keyboardist Reese Wynans joins the group, becoming a key piece on the album.

In 1986 his fourth album would be published, and first recorded live, Live Alive.

In 1989 they would publish In Step, the group's fifth album. And in 1990 Stevie recorded with his brother Jimmie, the album Family Style.

At that time Stevie enjoyed the highest cachet as a blues singer and guitarist, allowing him to play with the most prominent figures of blues music and with other great artists such as Stevie Wonder.

Shortly after the recording of the Family Style album, Eric Clapton is on tour in the United States, and decides to share the stage by inviting Stevie, his brother Jimmie and other artists to a concert at the Alpine Valley Music Theater in Wisconsin. Very Close to the city of Chicago.

To get back to Chicago, Clapton had hired a helicopter, and Stevie would travel by car. But Eric Clapton offered his friend Stevie his seat in the helicopter, to avoid the heavy traffic of Chicago.

Shortly after the plane took off, around one in the morning, the helicopter crashed, killing all its occupants. The pilot, two musicians, and an agent for Eric Clapton, and Stevie Ray Vaughan.

Eric Clapton was originally thought to be traveling in the helicopter. But by chance, Stevie took his place. Dying that tragic Monday night at the age of 35.

Jimi Hendrix was not only a benchmark for Stevie in the way he played, but he was also a benchmark in the way he performed on stage, with tricks such as playing the guitar from behind the head like Jimi, but also adding new shows like the to play from behind the back, maintaining even in this way, an absolute absence of errors. Putting all the meat on the grill when performing on stage.

As I have already mentioned, in 1974 Stevie Ray obtained one of his most precious treasures. A worn Fender Stratocaster that I would call "Number One" that you get buying at an Austin pawn shop, at a very low price due to its ramshackle appearance.

Something that he especially liked about this guitar was its thick neck with an unusual D shape, very well matched with its big hands.

Stevie modified it by adding a black pickguard with his initials instead of the original white pickguard, and a semi-floating bridge for left-handed guitars. This is how the vibrato lever was on top of the bridge. Having the clearest area of ​​potentiometers, and thus being able to operate the lever more freely.

He used to have 13-56 gauge strings attached to this guitar. Although he used to tune his guitars a semitone lower, in E flat, it is still an extremely high gauge for that tuning and for a long scale guitar like the Strat.

He also used thinner 11 and 12 gauge strings, but always tuned a semitone lower. In this way, it achieved a full-bodied sound, while maintaining the twang or tune typical of simple pickups.

In 1980 Stevie got another of his legendary Fender Stratocaster, this one from 1969, which he christened "Lenny", the same name as his wife since she was the one who gave it to him for his twenty-sixth birthday.

Another of his more characteristic Strat Casters is "Charley", assembled by Charlie Wirz of Charley Guitar Shop, with individual pieces and with Danelectro Lipstick pickups.

The "Main" is a Custom Stratocaster style guitar, built by James Hamilton, a gift from Billy Gibbons of ZZ Top. With neck-thru neck through the body and Ebony fingerboard. Both very rare qualities in a Stratocaster model. And the picks Stevie used were the Fender Medium.

Among the amplifiers he used are:

His main effects pedals were:

The simplest way to describe Stevie Ray Vaughan's virtuosity as a guitarist was the way David Bowie used to describe it: The "white Jimi Hendrix".