Brian May is a guitarist, composer, and doctor of astrophysics, known worldwide for being one of the members of one of the most famous British rock bands in history: Queen. 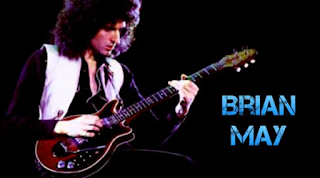 Brian Harold May was born in 1947 in the city of London. He was an only child and from a young age, he showed great interest in music and astronomy. Starting to play the ukulele, inspired by his father's skill with this instrument, until at the age of 7 he received an acoustic guitar as a gift. Being his main influences Jimi Hendrix, Jimmy Page, and Jeff Beck.

Freddie was raised by his uncles in India, as his parents decided to enroll him in a British school in this country, with the intention that he would receive a good education.

His school friends began calling him Freddie, a more or less faithful English translation of Farrokh.

After returning with his family to the island of Zanzibar, they decided to emigrate to the United Kingdom, to escape the outbreak of violence on the island.

After his arrival in London, Mercury participated as a vocalist in several groups and struck up a good friendship with Tim Staffell, vocalist of Smile. Since they both studied at the same art academy. Freddie was a fan of the group, and when Staffell decided to leave Smile, Roger and Brian asked him to be the lead singer for the band.

Freddie insisted on renaming the new group, and he was the idea of ​​baptizing it, Queen.

At the same time, he also changed his last name to adopt a stage name, and from that moment became Freddie Mercury.

As Staffell was also a bass player, the new trio tried several bassists until 1971 when John Deacon joined the line-up. And in 1973 they released their first album titled with the name of the band. What in.

Although the band was already beginning to enjoy some success, worldwide fame would not come until their fourth album, A Night at the Opera, in 1975.

In 1980 Queen had her first film experience, composing the soundtrack to Flash Gordon by Dino de Laurentis.

In 1986 they released A kind of Magic, which contains the famous song "Who Wants to Live Forever". The album was used in the soundtracks of the films Iron Eagle and The Immortals.

The group grew and evolved, reaching its peak in 1986, recording at Wembley one of the most legendary live shows in rock history.

In 1991 they released the last studio album released prior to Mercury's death. Innuendo. Including the mythical song "The Show Must Go On" ("The show must go on") written by Brian May for Freddie Mercury who was in his last months due to suffering from AIDS disease.

That same year, one of the best voices in contemporary music faded permanently, dying at the age of 45 due to the disease.

Returning to the past, and before the formation of the group, when Brian May was only 16 years old, he decided to build an electric guitar, since with its acoustics he felt limited. He decided to build it personally since he did not have the money to buy the expensive Fender or Gibson, and in part, he also took it as a personal challenge, with the intention of designing an instrument from scratch with the characteristics of what he considered the perfect guitar.

So with the help of their father, who was an electronic engineer, they started the project.

For the mast, they used wood from a fireplace frame. The wood was pure quality mahogany, although somewhat moth-eaten. But Brian plugged the holes in the woodworm with matchsticks and managed to shape it by hand.

The body of the guitar was made from a sturdy piece of oak. For the moving parts and hardware, he used springs from a motorcycle engine and rods from the luggage racks of bicycles.

For the fingerboard markers, Brian used mother-of-pearl buttons from his mother's sewing kit. Buttons still on the original guitar fretboard.

He tried to make his own pickups himself, but the result was not what he expected and in the end, he bought three Burns Tri-Sonic Pickups, although he did some small tweaks, rewinding the copper wire and filling them with epoxy resin. But only the center and neck pickups have this treatment, the bridge pickup says May that he will probably get it one day, but for now, it's just a Burns Tri-Sonic.

We can find sets of Burns Vintage Tri-Sonic pickups and Burns Brian May Tri Sonic. Both sets at the same price (about € 170), with chrome covers, ceramic magnets, and a very similar sound.

It took a year and a half to build, but perseverance paid off. The result was the Red Special, also known as "The Fireplace" ("The fireplace") or "The Old Lady" ("The old lady"). With a personal but magnificent sound, different from the rest of standard guitars. Very punchy due to the power of the pickups, but very versatile due to the instrument's design.

His Red Special accompanied Brian on all tours and is the guitar heard on all Queen records. Brian was never separated from her, and it is understandable since if he lost her, he could never go to a store to buy one like him.

So when you can't check in your guitar as hand luggage on a flight, you pay another ticket for your guitar, as if it were just another passenger. It is always better not to push your luck, just in case.

Brian continued searching for the ultimate sound he was after. After many experiments, he discovered that playing with a sixpenny as a pick, he achieved a metallic sound, and with the body desired by May.

Today Brian May manufactures this guitar model and other guitar and bass designs in his company Brian May Guitars.

The standard model of the Red Special can be found under the name "Brian May Signature" or under the name BMG Special. This model has a glued mahogany neck and body, and a 10 ”radius ebony fingerboard. Brian May Tri-Sonic style pickups, vintage tremolo, graphite nut, and Grover locking machine heads.

Mount a master volume and tone control. Individual pickup activation selectors, as well as individual selectors to activate the pickups in phase and out of phase. In phase, it would be the normal way to work a pickup, and out of phase, it would be explained in a simple way, an anomalous way of working with which a lower sound is achieved in volume, nasal and squeaky.

The scale of this guitar is 24 ”, even shorter than the scale of a Les Paul, and similar to that of a Jaguar or Mustang.

The body incorporates air chambers to reduce its weight and increase resonance, making it a fairly comfortable guitar to play.

The price is between € 700 and € 800. A real gift for a guitar of these characteristics, and with a cover included.

Brian May: Amp and Effects Pedals

Brian May's amp is the Vox AC30. To add more punch to your amp, use a Treble Booster pedal to increase volume and gain, as well as cut bass and boost treble. He currently uses the Brian May Fryer Treble Booster, and two rack format digital delays, one at 800 ms and the other at 1600 ms, connected to two different Vox AC30s. He also uses a Dunlop Cry Baby, and a Chorus Boss CE-1.

Once Queen began to gain popularity, Brian May decided to suspend his doctoral studies as an Astrophysicist, but 30 years later, in 2007, he decided to finish his doctorate in astrophysics, even working for NASA on some project. In addition, he also plays the piano, fully demonstrating his extraordinary ability.