CHARACTERISTICS of the Compressor Pedal, and Guide to the MOST POPULAR MODELS: MXR Dyna Comp, Boss CS-3, Forest Green, Keeley Compressor Plus.

Although some forgo the compressor pedal, not least because it may not be worth the expense of an effect that is not very noticeable, in reality, this effect has multiple functions and is one of the most used effects in music production. Giving our sound that point that we may lack, to achieve an authentic professional sound.

This effect is very characteristic of electric bass, electric guitar, and acoustics, but both drums and vocals are subjected to compression, precisely to obtain a more compact and professional sound.

It is very characteristic of singers to move the microphone away from their mouths, when they are about to execute a fat scream, manually applying what a studio compressor would do, which is to attenuate the volume peak that would be produced, when screaming with the microphone very close to the mouth.

On the other hand, when a vocalist sings at a low volume, the microphone would be brought as close as possible to enhance the low volume of his voice, and equalize the volumes whether he sings low or singing high.

Well, this is what the compressor would basically do automatically, among many other functions. 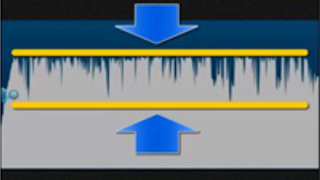 In this way, the compressor smoothes out the guitarist's dynamics, reducing the difference in volume between a passage played softly and another passage played more strongly. However, we would continue to maintain a certain range of dynamics, although this range would be reduced.

This is very advantageous when playing arpeggios or chords, keeping the notes of the arpeggios equal, and obtaining a compact sound in the chords.

Apart from affecting the dynamics, the string attack that we are used to, or that we usually print when playing, would also be affected. For this reason, some compressor pedals have an attack control to regulate the speed at which the compressor operates.

Another quality of the compressor is that it considerably increases the sustain of the notes. Something very advantageous to play with a slide, or to play a guitar solo for example.

This quality is also very interesting when we play clean, and we do not have the characteristic sustain of distorted sounds.

Precisely the distortion pedals, apart from supplying gain to the sound, would also apply some compression. Increasing this, as we raise the pedal gain level.

For this reason, in extremely distorted sounds, it is not necessary to apply compression, since the distortion itself has taken care of delivering a compressed signal.

It can also be used to push an overdrive and make it fly, increasing the gain, volume, and sustain of the aforementioned effect.

The compressor also provides a fuller sound, being very useful to fatten up the sound of simple classic or vintage-style pickups a bit.

The compressor is practically essential for funky and country-style guitarists, but its use by rock music guitarists such as David Gilmour, Mark Knopfler, Eric Johnson, Paul Gilbert, John Frusciante, or The Edge among many others is very common. 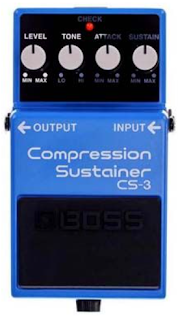 Some of these guitarists mentioned above may have used the Boss CS-3 Compressor Sustainer. A classic compressor pedal, but one that can be a bit noisy depending on the pedal's configuration, and the level of distortion added to it.

It has four controls:

- Volume: controls the level of sound we want to come out of the pedal.

-Tone: which controls the level of brightness or opacity that we want.

-Attack: it is responsible for the speed at which compression is manifested.

- Sustain: controls the level of decay or lengthening of the notes.

Another classic is the MXR Dyna Comp Compressor M102. A simple compressor pedal with just two controls, one for the output level or volume, and the other for controlling the compression level. 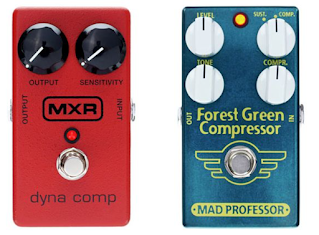 The Mad Professor Forest Green (True Bypass) is a relatively modern compressor pedal, but one that already appears on the professional pedalboards.

With typical volume, tone, and compression level controls. In Sustain Mode the dynamics and string attack would be more respected than in Compressor mode, making it ideal for playing blues and sliders. A great compressor pedal, but with a somewhat high price, although we are possibly talking about investment for life. 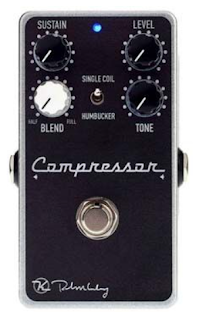 A newcomer is the Keeley Compressor Plus (True Bypass), the latest in Keele Electronics' series of large compressors, but this one is also not as expensive as its old brothers (Keeley C4).

With the typical controls for sustain, tone, and volume, and with the «Blend« control, which allows mixing the signal without effect with the compressed signal, to restore part of the dynamics.

It also incorporates a switch to adapt the compression response, optimizing its behavior for single or double pickups.

For people who like to shake the guitar hard, this effect is vital, being able to strum the strings as hard as we want. Also, I think that with the compressor, the stronger we shake the strings, the better it sounds.