Eddie Van Halen was an innovative guitarist, who developed and perfected tapping techniques. Being the precursor of the guitarists classified as "shredders", such as Joe Satriani, Steve Vai, or Yngwie Malmsteen.

If you do not know the term shredders, precisely in the biography of Yngwie Malmsteen you have more detailed information about what is called Shred techniques. 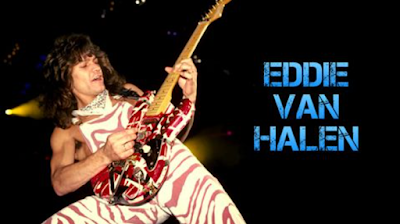 Van Halen was born in The Netherlands in 1955 (Nijmegen). But in 1962 he moved with his family to Pasadena, California. In the greater Los Angeles area.

Eddie Van Halen and his brother Alex began to take an interest in music, influenced by their father who was a jazz musician. Both Eddie and Alex started out in music playing the piano, but later Eddie switched to drums and Alex to guitar. If you have read correctly.

So in the end the roles were swapped, Alex switching to drums, and Eddie to guitar. Taking as references guitarists like Jimi Hendrix, Eric Clapton, George Harrison, or Jimmy Page.

Later, in 1974, the Halen brothers founded the Van Halen band. With Alex on drums, Michael Anthony on bass, David Lee Roth on vocals, and Eddie on guitar and keyboard.

Starting to play at high school parties and nightclubs, until one day Gene Simmons, bassist for Kiss, witnesses a performance of the group in a club and decides to help them record some demos for the Warner record company. With which they would record in 1978 their first self-titled album, Van Halen.

Quickly capturing the attention of the public, for the energy displayed on stage by David Lee Roth, and especially for the talent of Eddie Van Halen as a guitarist, his capacity for improvisation on stage, and for his innovative techniques on the guitar.

Some of the hits from his first album are "Runnin 'with the Devil", and "You Really Got Me".

In 1979 they would release the group's second album, entitled "Van Halen II". With the hits "Dance the Night Away".

In 1980, the band's third album came out, called "Women And Children First".

In 1984 they would release the album entitled "1984" with one of their most recognizable hits. «Jump«.

That same year, Michael Jackson offered Eddie Van Halen to participate in the recording of the song "Beat It". Eddie agreed and composed a spectacular guitar solo for the song in question, where his signature playing style and his high-gain sound can be clearly appreciated. The rhythmic base of the song was the work of Steve Lukather, Toto's guitarist.

However, this contribution from Eddie would annoy David Lee Roth, releasing a solo album without communicating it to the rest of the band. Commenting that he earned more money recording solo albums than with Van Halen, being expelled from the group for this comment.

Two years later, in 1988 "OU812" came out, an album that began to lower the classic hardness of the style that Van Halen cultivated.

During the recording of the song "Humans Being" for the soundtrack of the movie Twister, the tension between Sammy and the Van Halen brothers peaked, causing Hagar to leave the group in 1996.

Eddie would comment that he had to write the lyrics because Sammy Hagar's lyrics were too cheesy, offending Sammy.

Ray Danniels manager of Van Halen and the group Extreme, suggested Gary Cherone, singer of Extreme as a new vocalist for Van Halen. Becoming the new lead singer of the band. Resulting in the studio album released in 1998, "Van Halen III".

When it seemed that Van Halen had gone down in history when it comes to new studio releases after Gary Cherone's departure, in 2012 the band reappeared with a new studio album "A Different Kind of Truth". With former Van Halen member David Lee Roth on vocals, and Eddie's son (Wolfgang) on ​​bass. Although both belonged to the band since 2007. Participating in live recordings, and live performances.

Eddie Van Halen passing away in 2020 at 65 years of age, after several years of fighting throat cancer.

Eddie named his son Wolfgang because of his appreciation for music, and in honor of Wolfgang Amadeus Mozart.

Eddie Van Halen's most characteristic guitar is the famous Frankenstrat or La Frankenstein.

The Superstratocaster Models page would be complementary to this biography, as it details the characteristics of this guitar, the forerunner of the Superstrat models, developed by Eddie in search of his own sound. In addition, there are other models of EVH brand guitars and amplifiers.

One of the first guitarists to develop the musical possibilities of the floating bridges created by Floyd Rose in the early 1980s was Eddie van Halen.

The characteristics of these types of bridges, in addition to the device created by Eddie, appear on the Floating and semi-floating bridges page. The EVH D-Tuna.

Eddie Van Halen used to boil the strings in water for a couple of minutes before placing them on the guitar, to get more stability in tuning.

This is a method widely used by bass players since the bass strings are expensive and you have to make the most of them.

You would only have to remove the strings when they have reached their optimal use. You roll them up and put them in boiling water for two or three minutes. And then you dry them well with a cloth or kitchen paper.

To be able to do this, of course, the strings cannot be cut to the angles, otherwise, we could not put them back on the guitar.

With this method, it does not mean that we no longer have to buy new strings, but if dirt is removed, they will regain some shine and functionality.

The strings Eddie uses are EVH Premium Nickel 9-42. And the picks he uses are the 0.6mm Nylon EVH.

Among the pedals Eddie Van Halen has used is:

Eddie Van Halen has proven his ability as a songwriter, guitarist, or even as a pianist. Besides being an innovator in the development of designs and techniques on the guitar. Being an inspiration for future generations of guitarists "Shredders" or "Crushers".