Eric Clapton is a British Rock and Blues guitarist, singer, and songwriter, known for his masterful improvisation skills. Also known by the nickname of "Slowhand" ("Slow hand"), and with that of "God" ("God"). 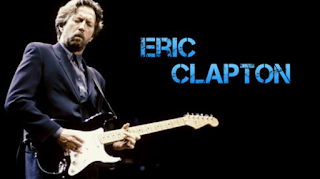 Eric Patrick Clapton was born in 1945 in the town of Ripley, Surrey (England). A 25-year-old Canadian military pilot, stationed in the United Kingdom during World War II, would get his mother pregnant when she was only 16 years old. But before Eric was born, his father returned to his wife's side in Canada.

Clapton grew up with her grandmother, and her mother's second husband, believing that these were her parents. While her mother, she was posing as her older sister.

Some years later, his mother married another Canadian soldier and went with him to Canada, leaving his grandparents in charge of Eric.

When Clapton was 9 years old, he would learn the truth when his mother returned to England to visit.

If Eric was already estranged from his original family, the impact of the news would cause him to distance himself even further.

At his grandparents' house, there was a certain musical atmosphere since his grandmother was fond of playing the piano. She is the one who gave him his first guitar for his thirteenth birthday. A difficult acoustic to play, which Eric would spend many hours emulating the ancient legends of blues music.

At the age of 16, he would leave school to enroll in the Kingston College of Art. An art school from which he was expelled for not making progress in the different areas of art, focusing solely on music.

After being expelled from Kingston, Clapton would begin working with his grandfather, as a construction worker. Allowing him this job, save money to buy his first electric guitar.

At this time Clapton would begin to frequent the Richmond area in London, and with 17 years of age, he would get to be part of the band The Roosters.

But shortly after he left this group to join the Blues Rock style group, The Yardbirds, in 1963. Becoming one of the most popular guitarists on the British music scene.

During his participation in The Yardbirds, Clapton earned his nickname "Slowhand" ("slow hand").

There are two theories about the origin of this nickname:

One of those theories is that when a string broke, he had to change it himself in the middle of the performance, the audience getting impatient.

The other theory is that the origin of the nickname is due to the fact that Clapton used to always be the last to look for his wallet when paying for the round at the bar.

Clapton would leave The Yardbirds 18 months later, for not agreeing with the musical direction of the Pop style, which the group had taken, to join the band John Mayall & the Bluesbreakers in 1965.

During his period with this group, Eric Clapton would gain the total recognition of the public, reaching that recognition, until the adoration.

In 1966 he would leave the Bluesbreakers to join one of the leading brands in all of London, Cream.

Cream cultivated a musical style between Blues and psychedelic Rock, coming to be considered one of the first supergroups in history, achieving worldwide fame and success.

The biography of Jimi Hendrix details a slight mishap that Clapton had with the great guitarist, during a performance of Cream.

After three years of successive recordings and massive concerts especially in the United States, the group broke up in 1968, due to the continuous discussions between Jack Bruce and Ginger Baker.

In 1969, Clapton founded the band Blind Faith with Steve Winwood. A great band that would only last a year.

The following year Clapton would publish his first solo album, simply titled Eric Clapton. One of the hits on this album is the Marchesa, "After Midnight".

That same year, in 1970, Clapton would form the band Derek And The Dominos, with which he recorded a single album, turning out to be one of the best albums of his career "Layla and Other Assorted Love Songs" ("Layla and other love songs ») With the hit« Layla «.

A song with a very lively rhythm, and with continuous changes of the key from D minor, to E major, and vice versa, to finally move to the key of C major, in the piano part and solo at the end.

At the beginning of the 70s, his addiction to heroin began, having him almost totally separated from the world of music, for two years. Until in early 1973, he managed to overcome his addiction, after undergoing acupuncture therapy.

And in 1974 he resumed his solo career with the album 461 Ocean Boulevard. Reaching one of his biggest successes so far.

Although his true great success as a solo artist would not come until 1977 with the album Slowhand. With hits like "Lay Down Sally", "Wonderful Tonight", and "Cocaine" (the latter version of a song by J. J. Cale, as well as "After Midnight").

In the late 1970s, Clapton's career began to feel the effects of his addiction to drinking. Although in 1980, he would publish a magnificent double live album (Just One Night) recorded in Japan at the end of 1979.

But in 1981 Clapton collapsed during a performance in Madison, Wisconsin (USA) and was immediately hospitalized. Later, entering a specialized clinic to solve his problems with alcohol.

In 1986, August is published, regarded as the official beginning of Clapton's career rebirth.

And in 1989, Journeyman would be published. On this album Clapton would return to his blues-rock roots, highlighting the songs "Pretending" and "Bad Love."

In 1990, after a Clapton concert with several guest artists in the Alpine Valley, several members of Clapton's American tour team and Steve Ray Vaughan died in a helicopter accident, occupying Stevie, the place reserved precisely for Clapton at that time. same helicopter.

In 1991, tragedy would hit Clapton hard again. His 4-year-old son Connor died on the spot, after falling through the window of a skyscraper in New York.

In 1992 the acoustic concert was published for MTV with the title Unplugged, containing the hits "Tears in Heaven" dedicated to his deceased son, and an acoustic version of the classic "Layla".

After Unplugged he would release 15 more studio albums, including two albums with tribute versions of his greatest music idol, the mythical bluesman Robert Johnson.

His last studio album would be released in 2016, I Still Do.

Shortly after, he declared that he was leaving music due to a neurodegenerative disease that causes muscle weakness, lack of sensitivity, coordination, and tingling in the hands. Preventing these symptoms, play the guitar.

Clapton's personal life turned out to be quite troubled.

In 1974 he began his relationship with his beloved Patty Boyd, which ended in marriage in 1979, breaking the relationship in 1984, due to problems with drinking and infidelity on the part of Clapton.

Eric would maintain an extramarital relationship with Yvonne Kelly, becoming pregnant with Clapton's first daughter (Ruth Kelly), when he was still married to Patty.

One year after Ruth was born, Connor would be born, the result of a relationship with the Italian photographer Lori Del Santo.

Eric and Patty would officially divorce in 1989. Clapton's insistence on the relationship with Patty, in the end only served for Patty to live a hell with a drunk and sexually obsessed who was Clapton at that time.

The same year of his divorce, he began a relationship with Carla Bruni, but a year later Carla would leave him for Mick Jagger, despite Clapton begging Mick not to seduce Carla. I suppose Jagger would reply: "Don't cry to me, Clapton," since shortly after Bruni would fall for Jagger's charms. Eric trying a little of his own medicine, ceasing from that moment on being the same womanizer as always.

Shortly after he began a relationship with Melia McEnery. A girl almost 40 years younger than him, marrying her in 2001, being Clapton's current partner, and with whom he has had three daughters so far.

Returning to his musical life, in his time with The Yardbirds, Eric Clapton used to use a Fender Telecaster, and a Gibson ES-335, along with a Vox AC30 amplifier, but in his time with Cream, he switched to the Gibson Les Paul and the Marshall amps.

Precisely from this time is his famous and distinctive guitar sound called Woman Tone that he took from his Gibson SG or Les Paul, and his Marshall amplifier.

This characteristic tone is obtained by lowering the tone of the guitar to the minimum and raising the tone controls of the amp to the maximum. Adding the amp's own saturation, or that of an overdrive pedal. Achieving a very peculiar tone, similar to that of a Fuzz pedal.

Later he also used other amps such as the Fender Champ with which Layla would record, and more recently he has almost always used a Fender Custom Shop Twin Tweed.

Starting in 1969, he switched to the Fender Stratocaster, becoming his most iconic guitar. Clapton's most famous Strat is the 'Blackie', built with parts from three different Fender Strats.

The strings he uses are the Ernie Ball Slinky 2221 gauge 10 - 46, and he uses picks that Heavy uses Celluloid.

Apart from using the saturation of his amps, his most characteristic effects pedals are the Vox Wah-Wah and Dunlop Cry Baby, and the Dunlop Fuzz Face.

Despite having a troubled life, full of addictions, romances, and tragedies, Eric Clapton has managed to complete a great and extensive musical career, being recognized as one of the most respected and influential artists of all time.