Jeff Beck is one of the most influential and charismatic guitarists. Being one of the great visionaries and pioneers of rock music.

Although Beck has not reached the popularity of many of his colleagues, he is well known within the world of guitarists, being an almost unknown legend. Deploying his talent and virtuosity as a guitarist in genres such as Blues Rock, Rockabilly, Psychedelia, Heavy Metal, Jazz fusion, or even recently with Techno music. 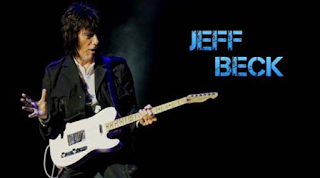 Jeff Beck was born in 1944 in Wallington. England. As a child, his mother forced him to study piano for two hours a day, awakening his interest in music in little Jeff.

Later he would enroll in the Wimbledon Art School in London, although according to Jeff himself, he went there because the food was good. Leaving school in 1963 to devote all his time to electric guitar and blues, fascinated by the music of Muddy Waters, and Buddy Guy.

Starting in the world of music with the band The Tridents. Allowing him to make friends with other musicians like Jimmy Page.

After Eric Clapton left the group The Yardbirds in 1965, Jimmy Page was offered the position, but he rejected the offer to recommend his friend, Jeff Beck, giving the guitarist his great opportunity.

Beck's style was noticed, giving a new perspective to the group, making the band pioneers of Psychedelic Pop-Rock.

Shortly after both Beck and Jimmy would participate together in the group.

Although after the arrival of Jimmy Page to the group, Jeff would leave the band at the end of 1966 due to the conflicts within the group and to feel musically dissatisfied.

Following his departure from The Yardbirds, Jeff Beck became the most coveted guitarist for leading British bands.

For example, Pink Floyd wanted to take over the services of Jeff, when Syd Barret was no longer able to continue within the band. The group already had the trump card of David Gilmour, that the truth is not a bad trump card, and the offer to Jeff was never consummated since according to Nick Mason, no one in the group had the courage to make a formal offer.

After the departure of Brian Jones from the Rolling Stones, the band tried to hire him. But although it was a juicy position, Jeff would reject the offer, to found the band The Jeff Beck Group in early 1967. Counting on two future stars like Rod Stewart, and Ron Wood, future guitarist of the Rolling Stones.

Although the group released two quite successful albums, Jeff's dictatorial character and continuous disagreements with its members would end the group. Dissolving Beck the group in mid-1969. Just before their participation in the Woodstock Festival.

Later Beck would try to form a power trio in the style of Cream or The Jimi Hendrix Experience. With Carmine Appice on drums and Tim Bogert on bass, their plans were thwarted after Beck suffered a serious car accident in late 1969.

Notably, Jeff is a big fan of Hot Rods or restored and modified vintage cars.

As I said just before forming the trio, Beck suffered an accident from which he was seriously injured. Needing almost a year to fully recover from it.

By then Bogert and Appice were already playing in the group Cactus. So the guitarist decided to form a new version of the Jeff Beck Group in mid-1971, with keyboardist Max Middleton, drummer Cozy Powell, bassist Clive Chapman, and vocalist Bobby Tench. Reaching a notorious success especially with the second album released with this group, «Jeff Beck Group«.

But in 1972 Beck dissolved the band, and in 1973 they definitively formed the power trio Beck, Bogert & Appice, after the dissolution of the Cactus group. Although the new group enjoyed notorious prestige, the band would only publish a single album. Surprising the audience, Jeff earned the fame of not being able to last long on any project.

After the umpteenth band dissolved, Beck decides to take a year and a half off, until the 1975 release of the album "Blow by Blow". An instrumental jazz-fusion album that received rave reviews.

In 1976 he would publish the album "Wired" in collaboration with Jan Hammer. But after the album's promotional tour, Beck decides to take a three-year break when it comes to new releases. Returning in 1980 with the album «There and Back«, which again had the collaboration of Hammer.

After the tour of the new album, Beck takes a break again. This time five years until the publication in 1985 of the album «Flash«. Featuring the hit song "People Get Ready" performed by Rod Stewart, and the instrumental song "Escape", winner of the 1986 Grammy for Best Rock Instrumental Performance.

Again Beck would open a four-year hiatus in terms of new editions. I suppose that between these parentheses he was dedicated to his other passion, the Hot Rods. Until at the end of 1989 he published the album «Jeff Beck's Guitar Shop«. With a good acceptance by critics and the public, and with a cover very in line with his two passions, the guitar, and the motor.

That same year Beck would go on a tour of the United States for a month with Stevie Ray Vaughan for the promotion of this album, receiving the following year a new Grammy for Best Rock Instrumental album.

That same year he participated in the recording of Jon Bon Jovi's song, "Blaze of Glory". Interpreting the guitar solo of said song.

In 1992 Jeff Beck would participate as lead guitarist on the album "Amused to Death", by former Pink Floyd member Roger Waters, Waters himself declaring that this album is at the height of mythical records by his old band, such as "The Wall "Or" The Dark Side of the Moon ".

A year later he would publish with the band Big Town Playboys, "Crazy Legs", as a tribute to Gene Vincent, and the guitarist of his band, Cliff Gallup.

After a decade of the absence of editions of original material, Jeff Beck published in 1999 the album Who Else !. And two years later he published the album You Had it Coming. The song "Dirty Mind" would bring him a new Grammy in the category of Best Instrumental Rock Theme.

And in 2003 he released the album, Jeff, taking with the song "Plan B", his fourth Grammy.

After more than 50 years of his career, his latest work so far is the album Loud Hailer released in 2016. 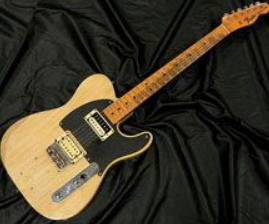 The assortment of guitars that Jeff Beck has used is quite extensive. Like Fender Stratocaster models from every possible decade, and various Gibson Les Paul models from the 1950s. One of his most characteristic models is the 1954 Fender Esquire Telecaster used early in his career. This guitar only has one pickup in the bridge position. And the Telecaster Custom with two double Seymour Duncan pickups in the style of a Les Paul. Something that would be quite copied later.

The pickups that are usually mounted on their Strat models are the Fender Noiseless.

His main pick is the thumb of his right hand, although he also uses the rest of his fingers to produce his characteristic sound, accompanied by a great technique with the vibrato lever. Jeff always leaves the tremolo bridge of his Strats raised at the back so that he can use vibrato both towards the lows and highs.

For the bridge to be raised we have to regulate the tension of the springs so that the strings can print the necessary tension to raise the bridge from behind. This can be regulated depending on the number of springs and their tension. Being able to regulate this tension with the two screws that hold them.

Among the effects pedals you have used are:

Jeff Beck during his more than 50-year career, never played it safe. Innovating, evolving, experimenting, and reinventing ourselves, to this day.