Steve Vai Biography - The Fastest Guitarist In The World

Steve Vai is an American guitarist, composer, producer, and singer, classified as a shredder guitarist due to his great dexterity when executing and developing highly complex musical pieces. 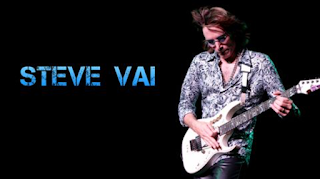 Steven Siro Vai was born in 1960 on Long Island, New York. Steve would begin to be interested in the electric guitar due to his admiration for great rock guitarists such as Jimi Hendrix, Jimmy Page, or Brian May.

At twelve, Steve finds an ad about a 16-year-old who is willing to give electric guitar lessons and decides to attend his classes. That young master was none other than Joe Satriani.

Later, in 1979, he would graduate from Berklee College of Music. One of the most prestigious modern music universities in the world, allowing you to work for legendary guitarist Frank Zappa, transcribing scores of his guitar parts.

Impressed by the young guitarist's talent in transcription, Fran Zappa offers to join his band as a guitarist when Steve was only 20 years old.

In 1983 Steve left the Zappa group to start his solo career. And in 1984 he released his first solo album, entitled "Flex-Able".

The following year, in 1985, Steve would join the Alcatrazz band, replacing none other than guitarist Yngwie Malmsteen. Publishing with this band, the album «Disturbing the Peace«.

Shortly after he is recruited by David Lee Roth, after leaving the Van Halen group at the height of success. Releasing with Steve Vai the albums "Eat‘ Em and Smile "in 1986, and" Skyscraper "in 1988.

Later he would join the band Whitesnake, publishing at the end of 1989 the album "Slip of the Tongue".

And in 1990 he would record a new solo album ("Passion and Warfare"), reaching his solo career, worldwide recognition. Considered this album as one of the best electric guitar records of all time.

On this album Steve mainly used a 7-string electric guitar developed by Vai himself in collaboration with Ibanez (Ibanez Universe UV77MC), creating the Universe model. The first standard 7-string guitar produced in series and would mark the contemporary characteristics of these models. 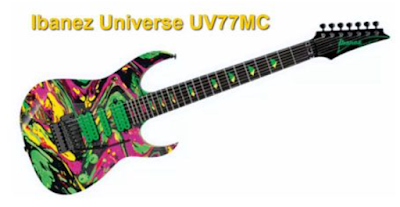 In 1993 he would publish the album «Sex & Religion«. With a more vocal style, than instrumental.

In 1995 Steve recorded the album "Alien Love Secrets", and in 1996 "Fire Garden" was released. With one half for instrumental themes and the other for songs with lyrics, Steve established himself as a singer.

The following year he would participate in the tour called G3, organized by Joe Satriani, and in the company of Eric Johnson, recording a live album of the same name.

Steve Vai would later participate in numerous editions of the G3 in the company of Joe Satriani and other guitarists such as Yngwie Malmsteen or John Petrucci.

His last album so far was released in 2016, «Modern Primitive«.

Steve Vai is one of the historical users of Ibanez guitars, developing in collaboration with the brand, the famous Ibanez Jem (launched on the market in 1987).

The Ibanez Jem is a modernist Superstrat model, with a strong sound, a thin neck specially designed for solo guitarists, and the peculiar opening in the body of the guitar in the shape of a handle.

Something characteristic of Steve's guitars is the floating bridge, or Floyd Rose, as well as his signature models of Dimarzio (Evolution) brand pickups.

Another of his most characteristic guitars is the Ibanez Jem with a triple neck. The one in the center is a lead guitar with Floyd Rose, and the other two have a fixed bridge. The top one is a 12-string guitar, and the bottom one mounts a fretless fingerboard.

It would not be the only Steve Vai guitar with several necks, since it also has a guitar with three heart-shaped necks, and with a very particular neck situation.

The strings he uses are the 9-42 gauge Ernie Ball Super Slinky. The picks he usually handles are the 1mm thick Ibanez, and his most characteristic amplifier is the Steve Vai Carvin Legacy.

Its most characteristic pedals are:

Due to his virtuosity, Steve Vai has been compared to Niccoló Paganini, who was said to have made a pact with the devil, since it was thought that a normal person could never be so fast and accurate playing the violin.

In fact, Vai himself would hint at a certain "relationship with the devil" by declaring that he was six years old, the sixth day, of the sixth month, 1966.

In 1986 Steve would jump to the big screen appearing in the film Crossroads (Crossroads or Crossroads), inspired by the legend of Robert Johnson. A guitarist who supposedly sold his soul to the devil, with his summarized story appearing in the Biography of B. B. King.

Steve participated in the legendary final duel between a guitarist who had sold his soul to the devil (played by Vai), and a young guitarist played by Ralph Macchio (famous for his role in "The Karate Kid").

The young guitarist accepted the challenge with the intention of saving the also possessed soul of his old friend, although if he was defeated in this duel, he would end up losing his own soul.

Ralph's guitar parts in this duel were performed by Ry Cooder, although the final and most spectacular part, allegedly played by Ralph, was performed by Steve Vai himself, based on Paganini's Caprice No. 5.

Currently, Steve Vai continues to maintain a great state of form, maintaining all his virtuosity. Taking from his guitar those sounds that made him famous in the mid-80s.