I was not really satisfied with my old acoustics (if you buy cheap, you buy twice as is well known) and I wanted an upgrade. I was offered this Takamine at a good price and then I just took the opportunity. 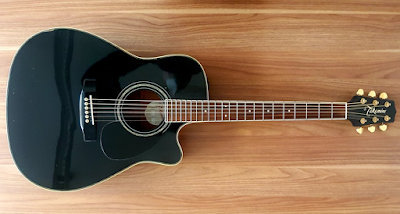 The preamp is spartan by today's standards. There is a volume control and a three-band EQ, nothing more. Well, that might be enough, especially because I've only used it once, but now I appreciate a built-in tuner because I usually only play it acoustically and then don't have to connect it. 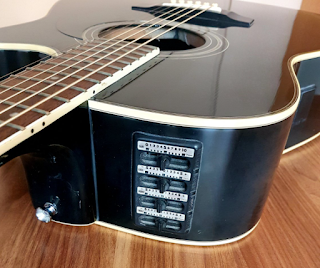 The opaque black paint hides most of it, but I assume that the craftsmanship is perfectly fine and I also rely on the reputation of Takamine.

But then there are two problems. The battery compartment, which is inserted separately in the upper frame, pops open very easily. That can happen unintentionally. But Takamine is now installing this differently and is no longer a problem with my new one.

But more serious is a creaking of the floor when you press against it, which happens, for example, when you hang it around. This is probably due to a slightly loose bar and I'll try to fix it the next time I change strings. It doesn't matter for the campfire, but if you want clinically clean takes, it can be annoying. I am not a specialist in acoustics and am not sure how it came about (impact? Incorrect storage?). However, I bought it with some signs of use and would therefore not necessarily assume a manufacturing error, but I wanted to have it mentioned for the sake of completeness because I cannot rule that out either. 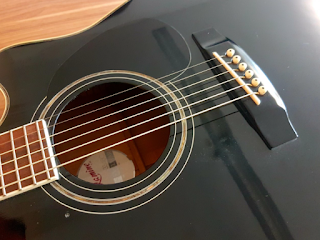 I'm used to 10 strings on the electric guitar. As an acoustic noob, I once researched the strength with which they are delivered, after all, it is not entirely irrelevant for the intonation, and I came across 12s. Compared to my old acoustics, it can also be played well, but not as soft as an electric guitar, if only because of the string thickness. But the strings are not as flat as postage stamps as I am used to. But that's all within the framework and I took it for granted because the ceiling and neck are straight.

In the meantime, I also have a twelve-string Takamine which, despite the twelve strings, can be played even better. But it was delivered with 10 strings, I think I'll try it on this one too. 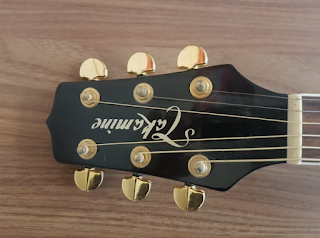 (Why are my headstock pictures always somehow rotated here? :-D)

According to the unanimous opinion, the guitar can easily keep up with much more expensive guitars in terms of sound. To be honest, I don't have the opportunity to compare, because I usually connect all my other guitars to the power supply and rarely get my hands on expensive acoustics.

Compared to other guitars in the price range, I can certainly imagine that. The sound is very assertive with powerful low mids. I used them in the context of a rock band and therefore gladly lowered them by 100 Hz in the mix. This is not to be understood as a disadvantage but underlines what I meant by “assertive”.

It actually sounds very balanced, because the highs are not underrepresented either. They are also very important for me to add something to the overtone spectrum between the electric guitars and that works very well with them.

If I wanted to make it sound a little richer, I simply tuned it down a whole tone, which also works really well.

Even though I mainly play strummings, she also gratefully accepts other playing techniques. I would call her a really good all-rounder.

When played over the pickup, you get the typical crispen piezo sound. I don't like it, but it can add a little “crack” to recordings if you need it. However, I only lose weight with micros. Live, however, is extremely practical and provides useful results here that can be rounded off a bit with the preamp.

I caught myself writing in the past tense when it came to how the guitar was used on me. But that's only because fresh has been replaced by the aforementioned twelve-string. But that does not speak against the EG-334BC, after all, a 12 is a bit different. By the way, it's a Takamine again, precisely because I'm satisfied with it.

The price-performance ratio couldn't be better. If you are looking for a good western, I can only recommend a Takamine Dreadnought.