Acoustic guitars, regardless of their types, are those that can reproduce their full sound autonomously.

In other words, a Spanish guitar would be an acoustic guitar, but since this type of guitar has its own name, actually when we talk about acoustic guitars, we are referring to guitars with metal strings. 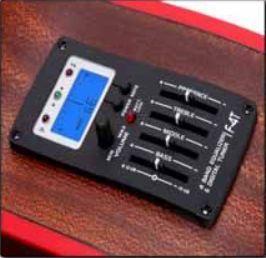 There are two large groups: acoustic and electro-acoustic. Although in reality, the only difference between the two is that electroacoustics has an integrated amplification system. Using the instrument when it is amplified, normally together with compression effects, to avoid excessive volume peaks, sounding the notes more even, with greater sustain, and with more body.

The acoustic guitar can be considered as a kind of electric guitar in a stand-alone format, being used to replace them in recordings known as unplugged or unplugged, precisely known as acoustic recordings or concerts.

Although in reality, these are guitars with a distinctly different feel and response.

The body of an acoustic is similar to a classic guitar body, but more voluminous and heavy since these types of guitars need to incorporate reinforcements in the bridge, due to the tension that the metal strings print on the tailpiece. Thus preventing the guitar from deforming.

If we take an acoustic guitar in one hand, and a Spanish one in the other, we will clearly notice the difference in weight due to these reinforcements of the body, and to the soul of the neck by the acoustics, adapting the design of each instrument to its characteristics.

So it is not feasible to install metal acoustic guitar strings on a Spanish woman who rides nylon strings. Since the stresses of these materials are very different. Being able to deform the guitar, or even the bridge may even tear off, apart from the impossibility of adjusting the soul of the classical guitar, since these models dispense with this system. 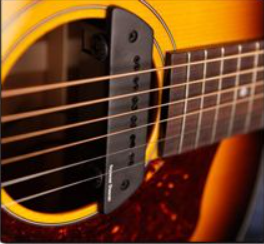 And to finish with this topic, if we put brass strings to an electric, it would not induce correctly in the magnetic field of an electric guitar pickup. Only pickups designed for acoustics would work well with the typical strings of this type of guitar.

The woods used in the construction of acoustic guitars are quite varied. Being able to use a large amount of wood in its construction such as Spruce, Nato, Cedar, Maple, Mahogany, or Rosewood. There may be a number of combinations of woods used for the different parts of the guitar body such as the back, sides, and top.

Normally used in the construction of the neck wood of nato or mahogany, and rosewood or ebony in the manufacture of the bridge and the fingerboard.

Shapes and sizes. Depending on the shape and size of the body of the guitar, three large groups can be created. The Dreadnought, the Jumbo, and the Parlor or Folk style. 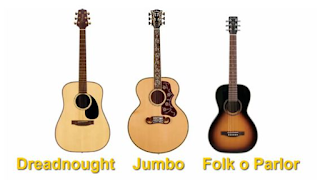 Among the most popular types of acoustic guitars, we find the DREADNOUGHT Models, considered as the standard acoustic guitar model, also known as size D. Used by practically all manufacturers, being developed in its day by the legendary brand of acoustic guitars Martin, reaching this design 80% of all the production of the mythical brand.

Dreadnought-type acoustics have a large, pear-shaped body, distinguished by their round sound with great balance throughout the frequency range.

The Jumbo is a typical Gibson guitar design, with a very bulky 8-shaped body, mounted with a distinctively shaped bridge. This model has a deep and forceful sound, aimed at reaching the maximum possible sound volume. 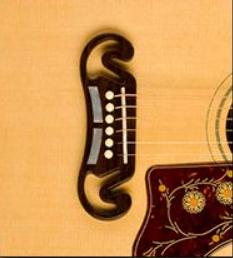 A guitar with a striking sound and aesthetics, although due to its large size they are somewhat uncomfortable, especially for a small guitarist, being able to have the Mini Jumbo models to make things a little easier for us.

However, by reducing the soundboard, the sound would also be affected, its sound also being Mini Jumbo.

The concert, Folk or Parlor Guitars

Another of these groups would be concert guitars, finding in this group the so-called 0, double 0 (00), and triple 0 (000), typical of the Martin brand, although these names are also generally used in other brands.

Being the model 0 the one that has a smaller size known as concert guitars. The double zero would be called the great concert, and the triple zero as Auditorium.

Increasing the proportion of the body, as we add zeros.

All these models refer to the same type of acoustics derived in its morphology from the Spanish guitar but adapted to the greater tension caused by the steel strings, which emerged in the first decades of the 20th century.

Being the model 0 one of the first developed by the Martin brand with this type of strings, forming an essential part of American music such as blues.

New larger models were added to the Martin catalog, due to the need to obtain a greater presence of sound, when guitarists played with other instruments. In the process, different styles of acoustic guitar with different sounds were born, each model reaching its own personality.

The larger and larger-scale models tend to have a more balanced sound in terms of volume, clarity, and presence throughout the entire frequency range.

While the models with a shorter scale and smaller size would tend to sound sweeter, and with lower volume, being less appropriate as their size decreases, to develop accompaniment rhythms.

Parlor guitars being the smallest ones with the union to the body normally at the 12th fret, achieving a very comfortable instrument, easy to transport, and with a somewhat harsher sound, but at the same time sweet.

These are large chunks of body sizes, shapes, and scales.

The 12-String Acoustic Guitar Models are among the most popular in this guitar string format.

These are called 12-string guitars, but the strings are actually played in pairs. So it would be more like guitars with six pairs of strings, and the tuning would be the same as standard tuning, but of the same note in the same octave, or in different octaves.

The top four by an octave apart, and the bottom two by the same octave. In other words, the two strings give exactly the same note (unison).

These guitars produce a loud sound with a characteristic chorus effect.

One of the most innovative Types of Electro-Acoustic Guitars would be the Roundback Guitars with a rounded bottom developed by Ovation.

Manufacturing both the sides and the bottom of the guitar, in a single piece of fiberglass or carbon fiber.

The design of this guitar is oriented to solve feedback problems or couplings derived from traditional acoustic models, so its reason for being is the amplification of the instrument, displaying all its potential and its characteristic sound so particular and distinctive.

Finally, we would have the types of acoustic guitars with a metallic resonator, called resonating guitars or dobro. Producing its sound by one or more metal cones instead of the soundboard, the body can be built with wood and metal, or completely of metal.

Its design is oriented towards obtaining a higher volume compared to a traditional guitar, making itself known alongside other instruments, although this type of guitar has a very particular sound, being highly appreciated in blues and bluegrass music, and in such typical techniques. of these genres as the use of the slide.

In this video, you can enjoy the characteristic sound of the Different Types of Acoustic Guitars.