David Gilmour is a British songwriter and guitarist, universally known for being one of the leading members of the progressive rock band Pink Floyd. 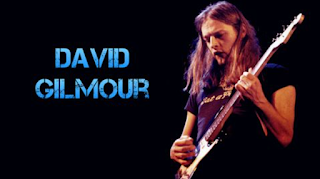 The best way to define Mr. Gilmour's playing in one word would be filing. And the best way to define filing would be David Gilmour. Mastering to perfection, the art of knowing how to wait, to play the exact note, at the precise moment. Composing not only with notes but also with waiting times or silences.

He is also an expert dominator of rope stretching techniques or bendings, his solos being an entire academy where he can study and practice this technique.

David began to play the guitar in his teens influenced by guitarists such as Pete Seeger, Leadbelly, Hank Marvin, or Jeff Beck.

Gilmour would befriend Roger Barrett, known as Syd Barrett. The one he used to hang out with to play guitar.

But the stresses of the group's nascent rise, and his problems with hallucinogenic drugs, took a toll on Barrett's mental health. Joining the band at the end of 1967, his old friend David Gilmour to help him.

But Barrett never recovered, having to leave the group within a few months of the arrival of his friend David. Roger Waters became the new leader of the group, and David Gilmour the new guitarist and one of the band's vocalists along with Roger Waters and Richard Wright.

Pink Floyd continued in its next studio editions cultivating psychedelic rock, and experimental music, until in the edition of the album "Atom Heart Mother", the group began to move towards symphonic and progressive rock.

And in 1973 they would publish their eighth album, producing the band's greatest studio success, being one of the best-selling albums in history "The Dark Side of the Moon". With elegant ambient sounds and the hit song "Money".

The album featured the participation in production issues with the sound engineer Alan Parsons, going on to have his own career as an artist thereafter.

The next studio album was "Wish You Were Here". Released in 1975 and very well received by the public, with the homonymous hit to the title of the album, and with the song dedicated to the founder of Pink Floyd, Syd Barrett. Shine On You Crazy Diamond.

The Masterpiece «The Wall»

In 1978 Gilmour would embark on a solo project, resulting in the album titled David Gilmour. And in 1979 Pink Floyd released the double album The Wall.

The shadow of Syd Barrett reappears as part of the album's theme. Resulting in an epic rock opera, which has gone down in history as a masterpiece of contemporary music.

Addressing topics such as the horror of war, intolerance, maternal overprotection, authoritarianism, educational oppression, love failures, the pressure of fame, and drug use. Issues that enclose the main character in his inner world, through a symbolic wall.

In the case of Comfortably Numb, it is simply listed as one of the best solos ever.

During the recording sessions of The Wall, Roger Waters expelled keyboardist Rick Wright from the band, because he was dissatisfied with his contributions.

After his dismissal, Pink Floyd would publish "The Final Cut" in 1983. With more modest sales levels than previous editions of the band.

And in 1985, Waters declared the extinction of Pink Floyd arguing that the creativity of the band had definitely been exhausted.

The other members of the group, Gilmour and Mason, refused to accept this decision, continuing with the group. Being sued accordingly by Roger Waters. The courts dismissed the lawsuit, and Pink Floyd was able to continue after Waters' departure.

After the sentence, Gilmour and Mason called Wright in 1987 to participate in the band's new album "A Momentary Lapse of Reason" (1987).

However, Wright would not appear as an official member of Pink Floyd until their next studio album in 1994 "The Division Bell".

In 2014 the last and (more than likely) definitive studio album of the band, "The Endless River", would go on sale.

David Gilmour has released four solo albums during his career ("On an Island" - "About Face"), the last one in 2015, "Rattle That Lock".

One of David Gilmour's mythical guitars is the Fender Black Stratocaster that underwent many modifications over the years. It has a slightly shorter vibrato lever and is bridged with a Seymour Duncan SSL-5 pickup, with a bit more power and punch than a normal single alnico pickup.

The Red Stratocaster has active EMG pickups. Mainly used live for its versatility, and to avoid noise interference from other electronic devices deployed by the band in concert.

The Gibson Les Paul Goldtop with P90 pickups, he used for the solo on "Another Brick in the Wall."

The strings he uses are the GHS David Gilmour signature set F hybrid sets for the Strat and set G for the Les Paul.

The Stratocaster set has three wound strings of a certain thickness for punchy bass, but the smooth strings are not too thick to be able to stretch more easily, but for optimal handling of these strings in a strat you need fingers equipped with a good callus. For a short-scale guitar like an SG or Les Paul, they are quite manageable.

David mounts his Les Pauls with the GHS Signature set G that would be very similar to the previous ones, but slightly raising the gauge of each string to obtain a characteristic thick Les Paul tone, and without problems in the stretching due to the short scale of this model. and for leathery fingers like David Gilmour's.

The picks he uses are the David Gilmour Picato. And when it comes to amplifiers, David usually uses 100-watt Hiwatt heads.

David Gilmour has used a lot of different effects pedals, but the main basis of his sound would be compression, distortion, and delay.

In terms of compressors, he has used the MXR Dynacomp and the Boss CS-3.

In matters of overdrive or soft distortion, he has used, among others, the legendary Boss SD-1 and the Boss Blues Driver BD-2. And for heavier distortions use the Proco Rat.

In delays, he has used the Boss DD-3, but sometimes using two to see as in the case of "Run Like Hell".

When it comes to Fuzz Distortion, he has used the Fuzz Face Dallas Arbiter, and the Big Muff. In addition to the Wah Voxy Dunlop Cry Baby.

David Gilmour is a living legend of the electric guitar, but his ability is not limited to the guitar alone. Also playing the bass, the still pedal, the drums, the saxophone, keyboards, the harmonica, or the mandolin among others. Proving to be a genius of music.

Barrett was also a childhood friend of Roger Waters, forming the band Tea Set together. But soon after, Syd Barrett came up with a new name for the band: Pink Floyd, in memory of two old blues musicians, Pink Anderson and Floyd Council.

Featuring Barrett as lead vocalist and guitarist, Roger Waters as a bassist, Rick Wright on keyboards, and Nick Mason on drums.

And in 1967 they released their first album, "The Piper at the Gates of Dawn", psychedelic rock style. Being composed of most of the songs on this album by Syd Barrett, becoming the leader of the band.