Darrell is a highly recognized guitarist within the Metal subgenres, and founder of one of the most famous Groove Metal bands in history, Pantera. 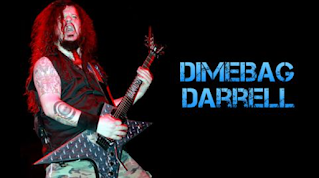 Darrell Lance Abbott was born in 1966 in the town of Ennis (Texas), very close to the city of Dallas. His father, Jerry Abbott, was a country music composer and had his own recording studio in Pantego, in the city of Arlington (within the greater Dallas area), where Darrell saw a lot of blues guitarists play, and where began his passion for the guitar.

Although at first, he played the drums of his older brother, Vinnie, this did not let him play long enough, and for this reason, he decided to switch to the electric guitar as a means of musical expression.

At an early age, Darrell already began to participate in state electric guitar competitions, being banned at only 16 years of age, his participation in these events since at that time, he had already won many of these competitions repeatedly.

Although he did not have too many problems with that, since with only 15 years of age, in 1981, he had already founded with his brother Vinnie Paul, the band Pantera, in the city of Arlington. The quartet was completed a year later by Rex Brown on bass and Terry Glaze on vocals.

The musical style of its beginnings was Glam Metal, a genre derived from blues-rock and heavy metal.

And in 1983 they released their first album, «Metal Magic«. This album was produced by the Abbott brothers' father, Jerry Abbott, at Pantego Studios.

Pantera released two other unnoticed albums ("Projects In The Jungle" and "I Am The Night") in a glam metal style.

The band decided to take a turn in their musical style to orient it towards Thrash Metal, where vocalist Terry Glaze did not fit. So in 1987, he was replaced by Phil Anselmo as the group's main vocalist, with a harsher and rougher vocal style than Terry Glaze, more suited to the new direction of the band.

After Glaze's firing and the arrival of Phil Anselmo, the band's style became heavier, and they released the album "Power Metal" in 1988.

Until in 1990, they released the album that definitely catapulted them to fame, "Cowboys from Hell". This album marked a before and after in Pantera, definitely moving away from Glam Metal.

Many fans, and even the members of the band themselves, considered this work as their official debut. Dimebag Darrell began to make his riffs and solos more complex, and Anselmo adopted an even more abrasive vocal style than on the previous album, Power Metal.

In 1992 they released the album "Vulgar Display of Power", considered one of the pioneering albums of Groove Metal, a genre derived from thrash metal, but with slower tempos. The project that would define the personality of Pantera's style, slightly approaching Hardcore.

In 1994, they released "Far Beyond Driven", slightly more direct and brutal (if possible) than its predecessor.

In the mid-90s, Pantera began to suffer numerous arguments and tensions among its members, mainly due to the abuse of drugs by Anselmo. What caused a distancing with the rest of the members of the band.

The group's next album was released in 1996, "The Great Southern Trendkill".

Anselmo recorded his vocal parts for this album in a New York studio along with Nine Inch Nails' Trent Reznor, while the rest of the group recorded the remainder in Texas. One more proof of the progressive distancing that Anselmo suffered from the rest of the members of Pantera.

In 2000 the band released what would be their last album, "Reinventing the Steel".

In 2001 the group decides to take time out, and its members take different paths.

Anselmo continued with his projects in other bands and the Abbott brothers formed the band Damageplan, after repeatedly trying to contact Anselmo, who had immersed himself in his own projects.

After Anselmo's disinterest in the band, Pantera officially and definitively dissolved in 2003. The breakup of the band was not at all friendly, and it transcended beyond the world of music, to reach the press and news.

While Darrell and Vinnie Paul, along with the Pantera technicians and other assistants, swore and perjured that they had tried to contact Anselmo by phone, he claimed that no one had been interested in him. Such was the confrontation between Anselmo and the Abbott brothers that the vocalist claimed in an interview that Darrell deserved a good beating.

The Abbott brothers founded Damageplan that same year and released the group's only album, "New Found Power" in early 2004. Continuing within the groove metal genre, very much in the style of Pantera.

At the end of that same year, at the beginning of a performance by the Damageplan group, in a nightclub in Columbus, Ohio, a mentally deranged armed with a pistol burst onto the stage, killing Dimebag Darrell and three other people. who tried to stop him.

The killer who caused the massacre, Nathan Gale, was killed while threatening to kill a hostage, by the first police officer to appear at the crime scene. James D. Niggemeyer.

Eleven years later, in 2015, Darrell's grave was desecrated, and its author boasted of his feat on Twitter, commenting on a lot of bullshit, turning humanity, to agree with Albert Einstein, who said that there were only two infinite things, the universe, and human stupidity, although the universe was not entirely sure.

Most of the guitar models Darrell has used are ML models, which are kind of like a cross between a Flying V and an Explorer.

In the Dean brand, we have a number of signature ML and Razorback models by Dimebag Darrell, a brand that the guitarist used for much of his career until after 1995 he switched to the Washburn brand.

I originally used a Bill Lawrence XL500 pickup in the bridge position, but instead of placing this mic in the natural or standard way, I flipped it over to reduce any loud sounds.

In the neck position, he used to carry a Dean DMT USA Dimetime.

Later Darrell collaborated with Seymour Duncan to develop a Bill Lawrence style pickup, the result was the "Dimebucker". Which Darrell used on his guitars, along with a 59 'Seymour Duncan SH-1.

Darrell used 9-46 or 9-50 gauge DR strings, strings not especially thick for the musical genres Darrell developed. And with standard tunings, Drop Re or D, or by lowering all open notes by a semitone or a full tone.

The picks I used were the 0.88mm Tortex, the green ones.

Dime preferred these solid-state amps over tube amps, because he said he found tube amps too warm, and a little lacking in gain for his expectations.

But hey, he ended up using tubes in his Krank Krankenstein amp that he designed himself and used in his time with Damageplan.

MXR also has signature pedals with the guitarist's own and characteristic sound. Like the MXR Dime Distortion and the Dimebag Crybaby From Hell Wah.

It also featured a Digitech Whammy octaver with a built-in pedal to modulate the effect, and Rocktron noise gates.

Anselmo has stated that they would be willing to reunite Pantera, but Darrell's brother, Vinnie Paul, affirms that this reunion will never happen, since, according to him, "there will never be Pantera without Dimebag Darrell".