Eric Johnson is an American guitarist who develops mainly Instrumental Rock with his electric guitar but is also a great teacher with the acoustic guitar.

For most guitarists, when they are not accused of a lack of virtuosity, it is a lack of filing or deficiencies in the handling of the acoustic guitar.

But with Eric Johnson, there are no doubts. Being one of the most respected guitarists according to Guitar Player magazine.

If someone asks you for a guitarist who knows how to play the guitar 100% without cheating or cardboard, in a virtuous way, and with filing, you can tell him to listen to Eric Johnson playing acoustic guitar.

Making her sing with astonishing precision and ease. Being able to put in a second three impossible chords in different areas, followed by plucking from the sixth to the first string on the other end of the fingerboard, and all seasoned with bass sequences, harmonics, and arpeggios. 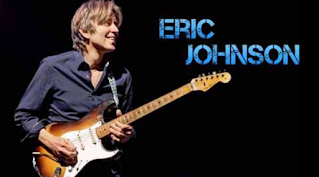 Eric Johnson was born in 1954 in the city of Austin (Texas). At 5 years of age, he began to play classical music as a pianist, confessing that most of his music has been composed on the piano, and then he passes it on to the guitar.

Deciding to start playing guitar at the age of 11, influenced by guitarists like Eric Clapton, Chet Atkins, Jimi Hendrix, or Django Reinhardt.

Starting his artistic career at the age of 16 in a psychedelic rock band called Mariani.

In 1974 he would join the band The Electromagnets in which he would spend the next three years, until he decided to form a solo project called The Eric Johnson Group, with drummer Bill Maddox and bassist Kyle Brock.

Recording the album "Seven Worlds" in 1978. But a series of disputes and problems prevented its publication at that time. Finally being published in 1998 (20 years after its edition).

Following the dissolution of the band, Eric would continue his career as a session musician for various artists in the recording studios.

But his luck would change after Prince saw him play on a television show in 1984. Recommending him to the production company to which he belonged (Warner Bros).

Launching in 1986 the album "Tones", dedicating a cover to it in Guitar Player magazine that same year, and his song "Zap" was nominated the following year for Best Instrumental Rock Song at the Grammy Awards.

But although his reputation as a guitarist was consolidated, the sales of his album were not as expected. Leaving the Warner Bros production company to move to Capitol Records, publishing his greatest success in 1990, and one of his best albums ("Ah Via Musicom"). Definitively launching the career of Eric Johnson.

Especially thanks to the hit song "Cliff of doover", winner of the Grammy for Best Instrumental Rock Theme.

Turning the sound of his Stratocaster into that theme, as a hallmark of Eric Johnson.

Johnson would take his time to release a new album, due to his extensive tours, and his obsessive perfectionism in the search to overcome his previous work. Finally released in 1996 a new album ("Venus Isle") after six years of waiting. Highlighting topics like Manhattan, and SRV. Dedicated to his legendary friend Steve Ray Vaughan.

Although unfortunately, this album would not have the impact of his previous work.

The following month he would promote his new studio album on the first G3 Tour organized by Joe Satriani, and in the company of Steve Vai. Editing a live album, highlighting his theme Manhattan.

In 2000 he started a side project, forming the blues trio Alien Love Child. Publishing a live album with this group (Live and Beyond).

In 2004 he embarked on a solo acoustic tour, where he demonstrated his skills as a pianist, and especially with the acoustic guitar. Martin Guitars taking an interest in creating his Signature acoustic guitar model (Martin MC-40 Eric Johnson).

The following year Fender would do the same, launching the Eric Johnson Stratocaster.

In 2006 he would return to the G3 Tour with Joe Satriani and John Petrucci to commemorate the 10 years of the event. Editing his last studio work at the end of 2017 (Collage).

Eric Johnson has used different types of guitars, but among his most characteristic models is the Gibson ES-335, and especially the Fender Stratocaster. Obviously mainly using their Signature models.

Lately, he is often seen with a Fender Stratocaster EJ Thinline Signature with an f-opening in the style of the Thinline Telecaster.

Among the acoustic guitars Eric uses are his Signature model, the Martin D-45, and the Maton C.S Classic.

And the picks he uses are the 1.38mm thick Dunlop Jazz III.

Among the amps he has used for his electric guitars is:

- For your acoustics use the AER Compact XL.

Its most characteristic distortion pedals are:

In Delays it is also well served:

In addition to the Dunlop Cry Baby wah, and the TC Electronics Stereo Chorus.

Eric Johnson has an ear so fine that he can notice palpable differences between a pedal connected to a power supply, or running on the battery. Finding differences even between carbon batteries and alkaline ones. Having a predilection for carbon batteries.

Eric Johnson has demonstrated his virtuosity and cleanliness in the execution of complex songs of high technical difficulty, being a true juggler of the guitar, although he has always tried to keep his extraordinary technique under control, to the benefit of musical expressiveness.