George Harrison was a British pop and rock guitarist, singer, and songwriter, a founding member of one of the most important bands in music history: The Beatles. 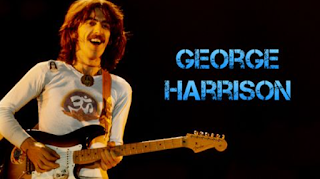 Harrison was born in 1943 in the city of Liverpool, England.

His father was a sailor and bus driver, Harrison having a humble origin. Growing up in a small social protection house, without a bathroom, and a twenty-minute walk from the station where I took the bus to go to school.

Harrison's earliest musical influences were musicians like Chet Atkins, Chuck Berry, or Ry Cooder. And at thirteen years of age, he would buy from a friend what would be his first guitar.

Formation of The Beatles

At that time he became friends with Paul McCartney, with whom he made the same daily bus journey. Paul would introduce him to John Lennon, with whom he formed the group The Quarrymen.

George would join them later, with Harrison participating in the first line-up of The Beatles. Until in 1962, the definitive formation was completed after the expulsion of the group of the drummer Pete Best, and the incorporation of Ringo Starr in the drums, completing the formation and Ringo becoming one of the best friends of the guitarist.

And in early 1963 the band would release their first studio album, Please Please Me. With the hit "Love Me Do". But until his second album (With The Beatles) released at the end of that same year, the first song composed by George Harrison (Don’t Bother Me) would not appear.

The rise of the group was meteoric, becoming the band in a phenomenon of masses.

And in 1964 the album A Hard Day's Night and the homonymous film would be released, making "Beatlemania" a worldwide phenomenon.

Two years later, in 1966, and with the band consolidated into absolute success, George Harrison married model and actress Patti Boyd.

Focusing the band that same year on the recording of a new studio edition, Harrison entering his most productive phase within the group.

Contributing three themes to the album Revolver. Experimenting with instruments unreleased in the world of pop, such as the Indian sitar.

He would also actively participate in the next album (Sgt. Peppers Lonely Hearts Club Band), released in 1967, cited by critics as one of his best works. Being one of the most influential albums and among the best-selling in history. Incorporating unusual elements in the band's compositions such as ballads, psychedelic music, and symphonic influences.

In 1968 Harrison dragged the other three Beatles and their respective wives to meditation days in India with Maharishi Mahesh Yogi, a spiritual guru he had met through Patti.

George's idea did not produce the expected result, and instead of bringing the group closer together, it actually accentuated the discrepancies between the members of the band.

First Solo Album by a Beatle

That same year George would publish the first solo album by a Beatle, Wonderwall Music, the soundtrack of the movie Psychedelic Wonderwall.

Also in 1968 was the publication of the Beatles album known as Double White, with Harrison contributing two songs for this double album.

For the 1969 album Abbey Road, Harrison would contribute two of his best compositions: Here Comes the Sun and Something, the first Beatles single not signed by Lennon or McCartney that reached number one on the charts.

Dissolution of The Beatles

And in 1970 the last studio edition of the band (Let It Be) would be published. Producing the dissolution of the band after 7 years of successful publications. Achieving the group the feat of placing 27 songs at number one on the charts. Something never achieved by any other artist of any genre, soloist, or group.

First No. 1 by a Solo Beatle

Shortly after the separation, George Harrison would publish in 1970 the triple album All Things Must Pass, with material accumulated over years. Album very favorably received by critics and public, being the first number one in sales achieved by a solo Beatle.

Incorporating the hit My Sweet Lord, accused of plagiarism due to its similarity to the song "He's So Fine" by The Chiffons group. Harrison was eventually fined for "unwitting plagiarism," potentially sparked by a case of cryptocurrency.

Cryptomnesia occurs when something is remembered that is stored in memory but is not recognized as a memory. The person has the feeling of having had a new and original idea as a result of their own creativity, but in reality, the origin of that idea is a latent memory of the past. This idea was engraved in his memory, but he does not remember the context of its origin.

Despite the tremendous expectations created, the material released by Harrison in the 70s did not live up to the record mentioned above.

In the mid-1970s the relationship between George and Patti was adrift. Producing the separation between the two, Patti initiating a relationship with an old friend of Harrison's. Eric Clapton; that he did not stop for years courting his friend's wife until he succeeded.

George and Clapton would never lose their friendship since Harrison is not exactly a saint when it comes to marriage. Being the world of music at that time, a true Sodom and Gomorrah.

Shortly after, George would marry his second and last wife, the Mexican Olivia Trinidad Arias, who gave him their only son, Dhani, born in 1978.

That same year, he promoted the film production company Handmade Films, created to carry out the film La Vida de Brian, by the Monthy Python family. The company became an important reference for British alternative cinema in the 1980s, although it failed in its attempt to expand markets with the failed 1986 Shanghai Surprise, with Madonna and Sean Penn, and ended up for sale.

In 1980 Harrison would withdraw from public life for a few years after the murder of John Lennon, returning to music today in 1987 with the album Cloud Nine. One of his best albums, and with one of his most recognizable hits "Got my mindset on you."

In 1999, an unbalanced man broke into his mansion in Oxfordshire, southern England, at dawn, stabbing him in the chest. His wife Olivia was also attacked, but both managed to hold the assailant until the police arrived.

According to the police themselves, Olivia's reaction when confronting the aggressor was essential in the outcome of the events. The musician was immediately hospitalized and despite the seriousness of the event, his life was not in danger.

At the end of 2001, George Harrison died of lung cancer. His fight against cancer had led him to several interventions since a tumor was detected in his throat in 1997.

The main base of the sound of Harrison and consequently of the Beatles, are the vintage character tube amplifiers, and the semi-solid body guitars.

Another hallmark of Harrison and the Beatles are the Rickenbacker:

Although he also used solid body guitars such as his famous 1968 Fender Rosewood Telecaster with which he played the guitar solo of the song "Let it Be".

On the subject of amplifiers he used:

In terms of effect pedals, the thing is quite concise. Supposedly he only used a Fuzz-Tone Master at one time to give his amps more gain.

For a long time, Harrison's creative contribution to the music of the Beatles would be little recognized, although, in reality, his music had a clear influence within the band, in genres such as psychedelia, and on spiritual issues within pop music. He is also a pioneer in humanitarian causes, which led him to promote the Festival for Bangladesh in 1971, the first charity rock concert in history.