Iron Maiden is a British Heavy Metal band founded in 1975 by bassist Steve Harris, the group currently completing almost 40 years of career since its first publication. Considered one of the most important bands in history within the genre in question, and also at a general level. 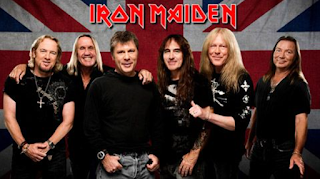 Since the group has managed to sell more than 100 million records worldwide thanks to the quality of their recordings, and their live performances. Considered one of the best in all of Heavy Metal.

Although without disdaining its great commercial marketing campaign developed through the infernal mascot of the band created by designer Derek Riggs, known as Eddie the Head. 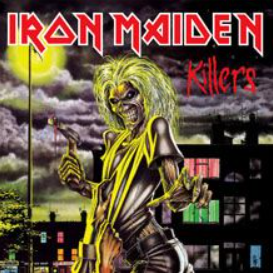 This character appears in all the albums, singles, and concerts of the group, and in the famous Iron Maiden t-shirts sold all over the planet. This character and its many variations and shapes become a milestone in graphic design.

The group does not lack great guitarists among its ranks, currently having no less than three solo and rhythmic guitarists. Joining the group in 1990 was the guitarist, composer, and psychologist Janick Gers.

Being Ritchie Blackmore the main influence of the guitarist, Gers having the particularity of being left-handed, although he plays the guitar as if he were right-handed like other great guitarists such as Mark Knopfler or Gary Moore.

But let's start with the origins of the band. After several changes in the line-up, the group would finally be consolidated with vocalist Paul Di’Anno, guitarists Dave Murray and Dennis Stratton, and drummer Clive Burr, always under the leadership of bassist Steve Harris. Taking inspiration from Harris for the name of his new group, in an ancient torture instrument with the same name: "Iron Maiden".

The group managed to record their first and self-titled album in 1980, this album reaching the fourth place on the British charts without practically any kind of promotion.

That same year, Dennis Stratton was replaced by guitarist Adrian Smith, with whom they published the album Killers in 1981. After the departure of vocalist Di Anno that same year, the great Bruce Dickinson would join the band, providing his voice. one of the most characteristic hallmarks of the formation.

The album The Number of the Beast was published in 1982. This album reached number one on the British charts, considered by many to be the best Iron Maiden album. Incorporating this album some of the most representative and popular songs of the formation ("The Number of the Beast", "Run to the Hills", or "Hallowed Be Thy Name").

Starting the most successful stage of the band, finally consolidating the formation with the entry of drummer Nicko McBrain after the departure of Clive Burr.

In 1983 the band would release a new studio album (Peace of Mind) with one of the band's most prominent and characteristic hits: The Trooper.

With a rhythm that literally emulates the intense gallop of a cavalry charge, with one of the most recognizable guitar riffs in the history of the band and Heavy Metal, and with a fabulous guitar solo performed by Adrian Smith, and Dave Murray.

Song was written by bassist Steve Harris, who is the main composer of the band, in addition to being recognized as one of the best bassists in the history of Heavy Hetal.

The group has recorded 16 studio albums to date, publishing in 2015 what is so far their last album ("The Book of Souls").

Being Steve Harris and Dave Murray the only members that have appeared in all the publications of the band.

Although Dave Murray belongs to one of the most successful bands in history, his childhood would not be easy, belonging to a troubled family with limited financial resources.

However, at 15 years of age, his life underwent a change after listening to the radio song "Voodoo Child" by Jimi Hendrix, Dave becoming at that moment a lover of Rock music, later beginning to listen to bands like Deep Purple, UFO, or Black Sabbath, although Jimi Hendrix would continue to be his greatest idol and musical influence.

Meeting at school a boy with the same musical tastes named Adrian Smith. Who had decided to be a musician after seeing a performance by Deep Purple and its magnificent guitarist Ritchie Blackmore. Forming their first band together in 1972.

In 1976 Dave would meet Steve Harris with whom he got along both musically and personally, quickly becoming friends. At that time Steve Harris had founded Iron Maiden several months ago, Dave Murray being the best guitarist he had ever met, proposing to the two guitarists who originally belonged to Maiden, the incorporation of Murray as the third guitarist, both refusing to this proposal.

Consequently, Harris immediately fired his first two guitarists, Murray entering the lineup since Steve understood very correctly that the melodies that Murray took out of his guitar fit perfectly with the sound he was trying to develop in his band.

However, at the end of that same year, Dave had an argument with the girlfriend of the lead singer of the band at that moment Dennis Willcock. Dennis demanded Murray's head from an argument with a third person outside the gang, or else he would leave.

Finally, Harris had to give in to the vocalist's blackmail, firing Murray, since according to Steve himself it was very difficult to find a good singer, to lose him at the first exchange. Although Steve Harris would later declare that he is ashamed of that decision.

But in 1977 it was Dennis Willcock himself who decided to leave Iron Maiden due to the problems it caused, firing three members of the group in a few months.

Harris immediately calling Murray to return to the band, Murray inviting his old friend Adrian Smith. Although Adrian would reject the offer because his band was more popular at the time than Iron Maiden itself.

But at the end of 1980 the guitarist Dennis Stratton, decided to leave Iron Maiden due to musical differences, presenting Smith again with the offer, definitely accepting the proposal since things in his band had begun to go seriously wrong.

Completing the perfect guitar tandem for the band. Although in 1990 Adrian Smith decides to leave the group due to musical differences with Steve Harris, being replaced by Janick Gers.

However, Adrian Smith would return to the group in 1999, completing the new trio of guitarists of the Iron Maiden of the 21st century.

Adrian Smith has used a wide repertoire of guitars throughout his career, but lately, it is more common to see him with his custom models made by Jackson like the Jackson Adrian Smith Dinky. Built with a dual coil DiMarzio Super Distortion bridge pickup and two Fender SCN Hum Canceling Noiseless pickups.

Or the green Jackson (Jackson Adrian Smith Green) mounted with a Seymour Duncan JB TB-4 pickup in the bridge position.

Janick Gers also deciding on the pickups manufactured by Seymour Duncan such as the Jb Jr.

Dave Murray has had a long-standing business relationship with Fender. This manufacturer was in charge of the development of its custom models such as the Fender Dave Murray Stratocaster with a DiMarzio PAF DP103 pickup in the neck position, a Fender Vintage in the center position, and a DiMarzio Super Distortion DP100 in the bridge position.

Or the Fender Dave Murray HHH Strat with Seymour Duncan Hot Rails SHR-1 (B and N) pickups in neck and bridge position, and a Seymour Duncan JB Jr in the center position.

Despite being a Fender guitar mounted with superb Seymour Duncan pickups, Floyd Rose Original vibrato, and being a custom model with the consequent commission for the guitarist, its price is quite moderate for being a model made in Mexico.

Although I have to review for the inexperienced, that this guitar does not have the classic Fender sound. Being his sound evidently more oriented to the genre developed by Murray.