Jack White is an American singer, songwriter, multi-instrumentalist, and producer, best known for being the guitarist and vocalist for the rock group The White Stripes. Key band in the resurgence of Garage Rock of the early 21st century. 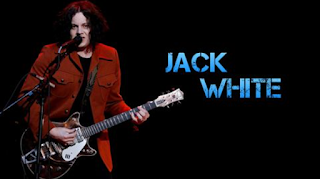 John Anthony Gillis was born in 1975 in the city of Detroit (Michigan). John would grow up within the teachings of a large Catholic family, his parents working for the Archdiocese of Detroit, John ending up as an altar boy in his childhood, like his siblings.

His first musical influences were his older brothers, learning to play the instruments that they abandoned. Starting to play drums at 6 years old, after finding the instrument abandoned in the attic of his house.

As a child, he became interested in classical music, but in elementary school, he began to listen to bands like The Doors, Pink Floyd, or Led Zeppelin.

John would also listen to the music of old blues legends like Son House or Blind Willie McTell, both of whom are among his favorite blues guitarists. Starting Jack to play the guitar at the age of 9, without neglecting his taste for playing the drums.

Jack later considered himself as a blues musician, this genre is always very present in his compositions, and in the structure of his songs.

John would later be accepted into a seminary to become a priest, but he eventually went to public school, as he thought they would not let him take his brand-new amplifier with him.

At 15 years of age, he would start an upholstery course taught by Brian Muldoon. A friend of the family who loves punk music, who exposed John during the three years that the course would last to this musical genre, while they worked together in the store.

During that time John would participate in several Detroit bands as a drummer, offering Brian Muldoon to form a group together, naming the duo as Los Tapiceros (The Upholsterers). Jack participating as a guitarist, since the instrument that Brian Muldoon played was precisely the drums.

After completing his apprenticeship as an upholsterer, Jack started his own upholstery business under the slogan "Your furniture is not dead." But the business would prove unprofitable, due to his disinterest in money and unprofessional practices such as making receipts with colored pencils or writing poetry inside furniture.

In 1996 Jack would meet Megan White at the restaurant where she worked as a waitress, beginning a courtship that would end in a marriage that same year. Changing the couple the tradition in the assignment of surnames, Jack adopting the surname of his wife (Jack White).

Meg began to play the drums for fun, Jack offering to form together an Alternative Rock band in 1997 that would be called The White Stripes. The duo made their first performance two months later at the now ramshackle Gold Dollar in Detroit.

Presenting the couple since then as brothers instead of marriage, with the intention of keeping the attention on their music, instead of their marriage relationship.

Releasing the band in 1999 their first self-titled album, loaded with classic rock sounds. Using the band since its inception old recording equipment to obtain that retro touch that characterizes them so much.

In the year 2000, Jack and Meg divorced but continued their career as an artistic couple, releasing their second album («De Stijl«) shortly after, continuing their display of fresh, direct, rough, and uncomplicated music, which would finally conquer the public. with the release in 2001 of his first big hit ("White Blood Cells").

Including this album a song ("Fell In Love With A Girl") that does not last two minutes, with a raw and strident sound that fills the entire space despite being only a guitar and drums, and with a stimulating rhythm and freshness. The band became one of the great sensations in Rock music at the beginning of this century.

In 2003 Jack performed five songs from the soundtrack of the film starring Nicole Kidman "Cold Mountain", and would also participate in the filming of the film, playing the role of a troubadour.

That same year The White Stripes released the album "Elephant", with another of the group's most recognizable songs ("Seven Nation Army"), starting the song with a guitar riff that resembles the sound of an electric bass.

In 2005 they would publish a new album ("Get Behind Me Satan"), using Jack mainly acoustic guitar instead of an electric guitar.

Meg would suffer from acute anxiety during the promotional tour of this last album, having the group cancel numerous concerts. Announcing the group at the beginning of 2011 its dissolution, denying any type of artistic, personal, or health disagreement.

Jack White would participate in other projects such as the one formed in 2005 with Brendan Benson called The Raconteurs, in collaboration with bassist Jack Lawrence and drummer Patrick Keeler.

Publishing the following year his first studio album ("Broken Boy Soldiers"), and in 2008 ("Consolers of the Lonely") the second. Being both publications were nominated for the Grammy Awards for Best Rock album. Announcing the group a new study edition that will be launched on the market in 2019.

During the promotional tour of the second album of Los Raconteurs, Jack suffered problems in his vocal cords, being replaced as a vocalist occasionally by Alison Mosshart, the leader of The Kills.

Finishing by forming a new band with the singer, called The Dead Weather, in which Jack participates mainly as a drummer. Releasing three studio albums so far, the last one released in 2015.

In 2012 Jack began his solo career with the album "Blunderbuss" with varied styles such as blues, rock, or folk. Publishing «Lazaretto« in 2014, and in 2018 what is so far the last studio edition of the composer «Boarding house reach«.

Jack White would marry in 2005 a British model Karen Elson whom he would meet during the filming of the music video for the song "Blue Orchid from The White Stripes". The wedding being officiated by a shaman on a canoe in the Amazon River, and with his ex-wife, Megan as a maid of honor, taking advantage of the fact that The White Stripes offered a concert in the Brazilian city of Manaus.

The couple had two children, officially dissolving the marriage in 2013. Although in 2011 Jack and Karen organized a divorce party with dancing and drinks, the day they would have completed their sixth anniversary.

One of his most iconic guitars is the 1965 JB Hutto Montgomery Airline that he used in White Stripes, which he defined as "a piece of hollow plastic", and that he would use to give the characteristic and particular touch of the band's sound.

In the band The Racounters and in his solo career he would use custom Gretsch models such as the Triple Green Machine that incorporates a retractable microphone like a vacuum cleaner cord, the Jupiter Thunderbird, or the Triple Jet made of copper. Seeing him lately with EVH models like the Wolfgang Special.

Among the effects pedals you have used are:

In addition to the Electro-Harmonix POG Octaver that allows us to raise or lower the sound of the guitar by one or two octaves. Obtaining different effects such as the resemblance to an organ, simulating a 12-string guitar, or lowering our tuning to resemble the sound of an electric bass.

Jack White is considered one of the leaders of the last generation of rock, breathing fresh blood to a genre that is not in its best moments displaced by other more popular musical styles today.

The term garage rock comes from the fact that its interpreters were groups composed of teenagers and young fans of the mid-60s, who used to have fun playing in the garage of their homes.

The music of these bands was really raw and straightforward, not generally being too elaborate due to the limited musical knowledge of its members, but in return, it was full of passion and youthful energy. The essence and true spirit of Rock'n'Roll.