Jason Becker was one of the greatest and most Hard Rock and Heavy Metal guitarists of all time. But a terrible illness cut short his promising career as a guitarist, though not his career as a musician. Composing music today despite difficulties. Giving us all a great example of improvement and effort. 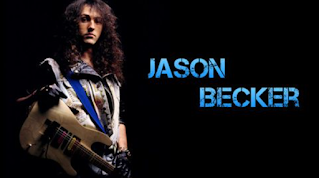 Jason Becker was born in 1969 in the city of Richmond (California). At 5 years of age, he would receive his first guitar as a Christmas gift. Having as teachers his father and uncle who were guitarists, quickly absorbing their knowledge.

Some years later, the diligent student already surpassed his teachers. Dedicating himself to the guitar sometimes up to 10 hours a day, influenced by guitarists like Brian May, Jimi Hendrix, or Eddie Van Halen. Although according to Jason himself has commented, he was always interested in classical music.

At 16 years of age he would meet Marty Friedman, forming the duo Cacophony together. Releasing in 1987 his first album (Speed ​​Metal Symphony) of Speed ​​Metal style based on symphonic music, coupled with westernized exotic scales and harmonies. The latter came from Friedman while the classical influences came from Becker. Popularizing the group the Japanese Hirajoshi scale or Japanese pentatonic scale.

And in 1988 they would release their second album (Go Off!) With slower and more melodic songs.

Releasing Jason at the end of that same year, his first solo album (Perpetual Burn). Making a display of technical skill, with baroque influences in the style of Yngwie Malmsteen, as well as oriental harmonic influences instilled by Marty Friedman. And of course loaded with Hard rock and Heavy metal. Considered by many to be one of the best Neo-Classical Metal albums of all time.

One night in 1989, and just 19 years old, Jason wakes up in bed with an intense tug on his left leg that would not subside all night.

The next day my left calf would feel very loose and tired. Appearing the first symptoms of the disease, although at that moment Jason did not give it too much importance, thinking that with time it would improve.

In 1989 the group "Cacophony" would dissolve, passing Jason Becker to the ranks of David Lee Roth's band replacing none other than Steve Vai.

Jason Becker's career was more than promising, but a week after joining the David Lee Roth Gang, Jason decides to go to the doctor to find out what the hell was going on with his leg.

After undergoing several tests, as he himself would comment, two doctors approached him with worried faces, and they commented that although they were not totally sure, it is most likely that he suffered from ALS (Amyotrophic Lateral Sclerosis). The same disease that the late Stephen Hawking suffered from. A degenerative neuromuscular disease that causes progressive muscle paralysis with a fatal prognosis in its advanced stages. Although Stephen Hawking came to live to be 76 years old.

According to Jason, what his doctors had told him entered through one ear and left through the other. Since the possibility of dying in those moments could not be part of his reality, since he was beginning to become a figure as a guitarist, if he was not already after obtaining the position that a virtuoso like Steve Vai previously enjoyed.

Jason began to learn all the songs of David's band, but in the next few months his illness would worsen and his father had to move to Los Angeles to live with him.

In 1990 he would begin the edition of the only studio album he recorded with this band while he was undergoing strong treatment.

As the weeks went by, Jason needed to mount thinner strings on his guitar, and lower the height of the strings, which he hated but was forced to do, because the strength of his fingers was no longer the usual.

Later Jason would help himself to compose with a keyboard, a computer and audio editors to get his ideas and compositions captured.

But the disease continued to advance, not only taking away what he loved the most, and what he had dedicated his life to. To play the guitar. Rather, he continued to atrophy his body to the point of not being able to move, and barely able to communicate. The virtuoso guitarist who could play while playing with a yoyo, he could only move his eyes and a few muscles in his face.

Even so, he managed to publish the album "Perspective" in 1996.

The following year, in 1997, Jason began to have a lot of difficulty breathing, having to undergo a tracheostomy. Preventing the intervention, articulate the slightest word. Having to remain continuously connected to an oxygen tank.

Although he went through very difficult times after the tracheostomy, his tenacity would drive him to keep going.

Jason Becker with his father Gary

His father Gary would invent an ingenious method to communicate with his son. Consisting of a sheet with some pictures and letters, which Jason uses moving his eyes to form words, which his father Gary later interprets.

Due to this method invented by his father, Jason Becker would achieve what in his condition would seem impossible: compose music.

Jason is inspired to compose by continuously looking at the neck of his guitar hanging on the wall, imagining the notes that he later transmits to his father, and which are played by his friend and virtuoso guitarist Michael Lee Firkins.

In 2008 he published the album «Collection». And in 2012 his last album (Boy Meets Guitar - Volume 1 of the Youngster Tapes) was published where we can listen to demos and ideas recorded by Jason during his adolescence, specifically between the ages of 15 and 17.

Among the guitar brands Jason Becker used are:

And to add even more punch to your amps I use the Boss SD-1 Super Overdrive.

The challenges and difficulties that Jason Becker has unfortunately had to face are totally extreme. But even so, Jason thinks he has a lot to do. Forcing his illness to see him day by day continue creating art of great complexity and quality, despite the effort that this entails. The disease failed to take away his passion for music.