John Frusciante is a North American guitarist, singer, and songwriter of Italian descent, known worldwide for being the guitarist for the Red Hot Chili Peppers. 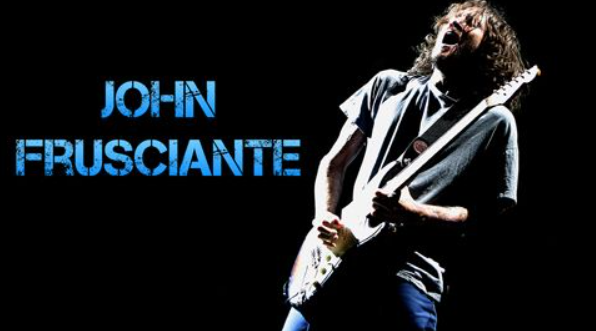 John Anthony Frusciante was born in 1970 in New York City (Queens), and in his adolescence, he moved with his mother and stepfather to Mar Vista, on the outskirts of Los Angeles (California).

At the age of 10, he began to receive guitar lessons influenced by guitarists like Jeff Beck, Jimmy Page, or Frank Zappa. And Jimi Hendrix could not be missing, probably the most influential guitarist in history.

Since nothing happens by chance, John made rapid progress thanks to his dedication, effort, and passion, spending much of the day playing the songs of the artists mentioned above.

When Frusciante was fifteen years old, he first saw the Red Hot Chili Peppers in concert, and became a fan of the band, to the point of learning the bass and guitar parts of the group's first three albums.

By frequently attending the band's concerts, he became friends with the group's guitarist, Hillel Slovak. Frusciante also befriended drummer, DH Danger, a former member of the Dead Kennedys. The two used to improvise together, and one day when John was 18, Danger invited his friend Flea ("Flea" in English), and bassist of the Red Hot Chili Peppers to improvise together. Connecting John, quickly with the great bass player.

That same year, in 1988, Red Hot Chili Peppers suffered a serious blow with the death by overdose of guitarist Hillel Slovak. After the death of Slovak, and the drummer Jack Irons, he left the band when he was not able to assimilate the death of his friend.

The remaining members of the formation, bassist Flea, and vocalist Anthony Kiedis decided to continue their career and hired DH Danger as drummer and DeWayne "Blackbyrd" McKnight as a guitarist.

However, McKnight could not quite convince the old members of the band, and they decided to find a replacement.

A Flea came to mind improvisation that had that day mentioned above with John Frusciante and decided to subject him to an audition. Accepting him as the group's new guitarist.

Shortly after the arrival of Frusciante to the group, DH Danger was fired for his excesses with drugs, being replaced by Chad Smith. And in 1989 they began the composition of what would be the group's fourth album, and first with Frusciante on guitar, Mother's Milk.

Becoming the first big commercial success of the band. Getting great recognition with the single "Knock Me Down" and "Higher Ground". The latter a version of a Stevie Wonder theme.

The next album was Blood Sugar Sex Magik. Being a success since its launch in 1991. With hits like "Give It Away", "Under the Bridge", or "Suck My Kiss". Turning the members of the Red Hot Chili Peppers, into superstars.

Something that would not fit very well with Frusciante, beginning to feel uncomfortable with his new status as a rockstar, disgusted by the excessive popularity of the band.

Frusciante would later confess that everything had gone too high, too far, and too soon. Everything was happening suddenly, and he could not cope with the meteoric rise of the band.

At a 1992 world tour concert, specifically at the Quattro Club in Tokyo, John Frusciante refuses to go on stage, saying at that moment that he had left the band. In the end, his colleagues managed to convince him to play at that concert, but the next day he left for California.

When asked by the band's manager how he could explain his sudden departure to fans, Frusciante replied with a terse: "Tell them I went crazy. "

Frusciante developed a strong addiction to drugs during his four years as a member of the Red Hot Chili Peppers. And after returning to his home in California, John falls into a deep depression, feeling that his life was over.

Frusciante focused on painting, and to cope with his depression began to use even more drugs, seeing his life seriously threatened.

Frusciante published in 1994 his first solo album, "Niandra Lades and Usually Just a T-Shirt". Most of the songs on the album were recorded in full addiction of the guitarist.

An article published in the Los Angeles New Times newspaper described Frusciante as a skeleton covered in hiding, on the brink of death.

For the next three years, he was locked up in his Hollywood home, covered in graffiti all over the walls. During this time, Johnny Depp and Gibby Haynes, his friends, came to his house and recorded the documentary " Stuff " ("Things"), highlighting his emaciated condition.

In addition, his house was destroyed by a fire, and Frusciante was injured trying to save some of his guitars. Ending the fire, with his entire collection.

His former partner Anthony Kiedis was the one who loaned him enough money so that Frusciante could buy a guitar.

In 1997, Frusciante's second album "Smile from the Streets You Hol" was released. In this recording, the delicate state of health of the guitarist can be appreciated, even coughing during part of the recording.

In early 1998, Frusciante entered the Las Encinas rehab clinic in Pasadena. After his admission, he was diagnosed with a life-threatening oral infection, which could only be cured by replacing all of his teeth with false teeth.

Even receiving grafts in the arms, due to the deteriorated state of his skin.

After recovering from his serious health, Frusciante began a new stage marked by spirituality and yoga. Starting a new life opposite to the previous one. In addition, in order not to be distracted from her musical and spiritual activity, she decided to give up her sex life.

In early 1998, the Red Hot Chili Peppers fired Dave Navarro, due to creative differences. The guitarist who replaced John Frusciante, and with whom they recorded the 1995 album One Hot Minute.

At that moment the band considered its dissolution, Flea commented to Anthony Kiedis, that the only way to continue with the band was with John Frusciante within it.

John Returns to the Band

With the guitarist free of addictions, Kiedis and Flea thought it was the right time to ask him to come back. When Flea arrived at the guitarist's house and asked him to return to the band, Frusciante replied crying, that nothing would make him happier.

Once the band was rebuilt, they began to work on a new album, "Californication", released in 1999. With stratospheric hits like "Otherside" or "Scar Tissue". Returning with Frusciante, one of the key pieces of the band's sound and compositions.

In 2001 Frusciante released three solo albums and began recording his fourth album with the Red Hot Chili Peppers, "By the Way", released in 2002. With great hits such as "By the Way", or "Can't Stop", with one of the most recognizable riffs in rock history.

In early 2005, the guitarist entered the studio to record his fifth album with the Red Hot Chili Peppers, "Stadium Arcadium. " Released in 2006, and with the hits «Dani California».

In 2009 John Frusciante definitely left Red Hot Chili Peppers, although according to John he had no intention of leaving the band when Flea told him about taking a couple of sabbaticals after the Stadium Arcadium tour, Frusciante decided to focus entirely on his own projects. mainly electronic music.

John was replaced by Josh Klinghoffer in the Chili Peppers, with whom they have published their last two albums, being the current guitarist of the band.

Although John Frusciante had a large number of guitars, his most used instrument is the Fender Stratocaster.

His favorite on this model is a 1962 Fender Stratocaster that he has used on every album since his 1998 return to the Chili Peppers.

Among other guitars especially prized by Frusciante are his 1963 Telecaster, 1962 Fender Jaguar, and 1955 Gretsch Falcon.

The spikes used are the Dunlop Tortex of 0.60 mm, oranges. And the strings that he usually uses are the D'addario 10-46.

We move on to the effects pedals :

And to get those great clean and crunch sounds, Frusciante used the MXR Dynacomp compressor.