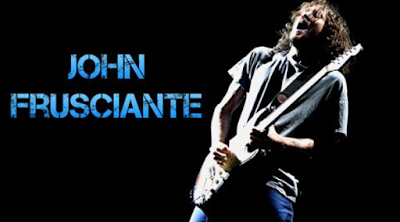 Phoenix must surely be the middle name of John Frusciante, because like the mythological creature, the lead guitarist of the band Red Hot Chili Peppers has risen from the ashes of self-destruction and reinvented himself to rule the world as one of the great guitarists of all time.

Having experienced both colossal highs and gut-wrenching lows in his extremely interesting musical career, today John Frusciante is at the threshold of guitar greatness and the world pays obeisance to this extraordinary talent. And yes, Rolling Stone magazine has acknowledged his amazing talent by ranking him a high #18 in its list of the top rock guitarists of all time.

John was born in Queens, New York on March 5, 1970, with music written in his genes. His father was a Juilliard-trained pianist and his mother a singer. After his parents’ divorce and his mother’s remarriage, John and his mother moved to Mars Vista, Los Angeles.

The young John was fascinated with the LA punk rock scene and became a fan of the band Germs. His stepfather was supportive of his inclination towards music and learning the guitar and presented him his first guitar when he was nine. By the time he was ten, he had mastered the music of the Germs’ record GI and moved on to studying guitar gods like Jimi Hendrix, Jimmy Page, Jeff Beck, and the alternative rock sound of Frank Zappa. He would devote hours of practice to learning the notes.

But at the age of fifteen, he discovered the music of the band Red Hot Chili Peppers, and that’s when he realized where his true passion lay. He wanted to play the music that was melodious with a punky, psychedelic flavor and decided that someday he would play with the band as lead guitarist.

John devoted the next three years of his life to acquainting himself with all the guitar and bass parts of the band’s three released albums. He relocated to LA because that’s where all the action was and soon went about striking up a friendship with the Chili Peppers’ bassist “Flea”.

When the Peppers’ founding guitarist Hillel Slovak died of a drug overdose, Frusciante was ready as ever to take over from where Slovak left. He was invited to audition for Slovak’s place. At that time Frusciante had been offered a contract by Thelonious Monster to play for them. But destiny willed otherwise and in 1988, Frusciante fulfilled his dream of being the lead guitarist for the Peppers.

The first record that the band issued after Frusciante’s joining was Mother’s Milk, released in 1989, which hit gold. It was in his next album with the Peppers- Blood Sugar Sex Magik, released in 1991, that Frusciante really found his groove and got rave reviews from all around for his awesome guitar playing.

Boosted by John’s incredible talent, the record was a huge double-platinum hit and sold thirteen million copies worldwide. It even garnered a Grammy for Best Hard Rock Performance, a testament to John’s skill with the guitar. The success of the album catapulted the band into the highest realms of fame and made them one of the premium rock acts in the world.

The Price Of Fame

John Frusciante was unable to handle all the fame and adulation that was part of their success. He would say later in retrospect, “It was too high, too far, too soon. Everything seemed to be happening at once and I just couldn’t cope with it.” At the height of their popularity, during the Blood Sugar Sex Magik tour to Japan, John abruptly left the band midway and returned to California. He retreated into a reclusive shell and slid into a deep depression. Drugs like heroin and cocaine beckoned as means to fight the depression and the demons within, and he succumbed to their allure.

The death of his friend River Phoenix in 1993 only served to make matters worse and gradually he became a full-blown drug addict. He was speeding headlong down the path of total self-destruction, courting near death in the bargain. An article in the New Times LA described him as a skeleton covered in thin skin’, but he said he liked the stick-like body shape “because it resembled David Bowie during the Ziggy Stardust days”.

Very soon he had no money left to fund his drug habit and released two obscure solo albums- ‘Niandra Lades & Usually Just a T-shirt’, and ‘Smile From The Streets You Hold’- by his own admission…to pay for his drug habit. Finally in 1998, before Frusciante could totally self-destruct and his considerable talent vanish without a trace, his longtime friend Bob Forrest shepherded him into “Las Encinas”, a drug rehab clinic at Pasadena. One month later, Frusciante emerged as a new man.

Back From The Dead

Red Hot Chili PeppersIn the meantime, the Red Hot Chili Peppers were on the verge of breaking up for want of a good enough lead guitarist. With John free of his addiction, Flea felt that the time was ripe for bringing him back into the fold. When Flea asked him to rejoin the band, John broke down sobbing and accepted the offer. Nothing was more important to him than his music.

With John back where he belonged, a rejuvenated Chili Peppers got back to making music with renewed vigor and released the 1999 superhit Californication. The record sold fifteen million copies and established the Peppers as the premier rock band in the world. A Grammy for best rock song (Scar Tissue) was the icing on the cake.

John was back with a bang and announced it to the world with this success. Two more albums followed in quick succession By The Way in 2002 and Stadium Arcadium in 2006 which were both super successes. Stadium Arcadium won four Grammys that year including Grammy for the best rock album. John’s guitar playing is dominant throughout the album and he also provided backing vocals as per usual.

John Frusciante has released an astounding eight solo albums since beating his drug addiction and emerged as an accomplished songwriter and singer. He has also provided five songs in the soundtrack of the movie The Brown Bunny. His playing style has evolved over the years. The only guitars he uses are vintage, pre-1970 Fenders and his favored axe is a 1962 Sunburst Fender Stratocaster. All his guitars were gutted in 1996 when his house caught fire and the first guitar he bought after rejoining the Peppers was a 1967 Fender Jaguar.

The Red Hot Chili Peppers are currently on a hiatus of indefinite length and John Frusciante is using the time to concentrate on his solo career. The world has woken up to his talent and he’s geared up to conquer the zenith of guitardom.

Don’t be surprised if you hear the now generation say…move over Page, Eric Clapton, and Richards, the new Guitar Gods are here and John Frusciante is the leader of the brat pack.