Kurt Cobain was an American musician, known to have been the founder, singer, guitarist, and main songwriter of one of the most important and influential bands of the modern era. Nirvana.

The band that popularized worldwide the subgenre derived from alternative rock that emerged in the late 80s known as grunge, or Seattle sound. Since this genre would be developed mainly by groups from the Seattle area, such as Nirvana, Green River, or Soundgarden. 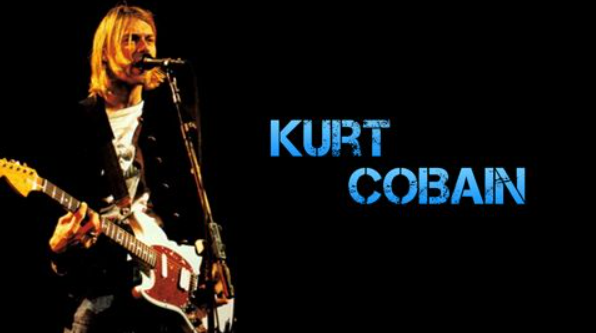 Kurt Donald Cobain was born in 1967 in the town of Aberdeen in the state of Washington.

Since he was little he would show artistic aptitudes by playing the piano by ear, drawing, and extracting rhythms from his little children's drums.

But things were not going well in his modest family, Cobain coexisting with the continuous arguments and fights between his parents that ended in divorce when Kurt was 9 years old.

At age 14 he would receive his first guitar from his uncle Chuck. Choosing the instrument instead of a bicycle. Taking refuge in music and his guitar to forget the problems of his dysfunctional and unstructured family.

From that moment Cobain tried to form a band with some of his friends, influenced by groups as diverse as The Beatles, Ramones, Kiss, or Led Zeppelin.

Later, Cobain would meet the bassist Krist Novoselic, forming together a few years later the bases of the Nirvana group.

In the first years of the group, several drummers would pass through the band, until finally, Chad Channing joined the group to launch the first Nirvana album (Bleach) in 1989.

This album would not reach the charts at the time of its release, but Nirvana was also not formed with the pretense of being a mass phenomenon.

But this fame or popularity cannot be regulated like the water that falls from a tap, never knowing in what time or place, it can end up blowing the bank.

The work of the drummer Channing did not finish convincing the members of the group, and he would be replaced at the end of 1990 by Dave Grohl.

Editing Nirvana at the end of September 1991 the album that would change the history of the group, its members, and alternative music worldwide.

At first, the sales expectations of this album did not reach half a million copies, but before the end of the year of its release, "Nevermind" was reaching that level of sales per week only in the United States. And by January 1992, he had already ousted Michael Jackson's album "Dangerous" from number one on the Billboard.

This album is responsible for making alternative rock known to the general public, and critics described it as one of the best albums of all time.

"Smells Like Teen Spirit" was the first single to be released from this album. Probably the most famous song in the entire grunge genre. Although this album also incorporates other great Nirvana hits such as "Lithium", "In Bloom", or "Come As You Are" definitively consolidating the band in absolute success. The title of this last song currently appears on the welcome sign of his hometown, in tribute to the most famous son in the city.

The group Killing Joke would file a lawsuit against Nirvana, for the similarity of the famous riff of this song, with that of its 1984 song "Eighties".

Killing Joke would withdraw the lawsuit after Cobain's death, but although there is a similarity between the two issues, there are honestly some differences that in my opinion would be enough for no court to classify it as plagiarism. Although it is possible that Kurt Cobain was inspired by this riff to develop his own theme.

In 1993 the last studio album of the band would be released. "In Utero". Reaching number one on the Billboard again, although without reaching the level of sales of Nevermind.

At the end of that same year, Nirvana recorded the acoustic concert MTV Unplugged in New York at Sony Music Studios in New York. But Kurt Cobain never saw it published. Since in April 1994, Kurt Cobain ends his life with a shotgun in his Seattle mansion.

In 1991 Kurt Cobain began a romantic relationship with the singer Courtney Love, which ended in marriage in early 1992 after the singer's pregnancy was known. Born in August of that same year Frances. The first and only daughter of the couple.

During his life, Kurt Cobain struggled with depression, addictions, and chronic stomach pains that affected him emotionally. Since he never had any diagnosis from the doctors.

Cobain had a bad idea to self-medicate with heroin. Although possibly this was not the sole or main reason for his drug use. In any case, it is still a very bad idea.

As Courtney Love was also a heroin user, the Los Angeles County Department of Children's Services took the Cobains to court, claiming they were unfit due to the couple's drug use.

And at two weeks old, Frances was taken into the custody of Courtney's sister, Jamie.

After several months of legal disputes, the couple was able to once again obtain custody of their daughter.

But later on, Kurt Cobain's addiction would get worse and worse. And even if his family and friends convinced him to enter rehab, in less than a week he would escape from the detoxification center to return to Seattle. Although his relatives and acquaintances would not know Kurt's whereabouts after escaping from the medical center.

A week later, Cobain's lifeless body was discovered three days after his death, by an electrician who came to the house to install a security system.

Shortly after his death, the live album Unplugged in New York was sold out in stores.

The assortment of guitars that Kurt Cobain has used is quite wide, but his favorite guitar was the Fender Mustang. Although later he customized it, placing a Seymour Duncan SH-4 JB double coil pickup in the bridge position.

Today the Fender Mustang Signature Kurt Cobain is marketed with its corresponding Seymour Duncan JB in the bridge position (just over € 800).

Although as I have already mentioned, he used other models such as the Fender Jaguar, Stratocaster and Telecaster, and Univox and Mosrite models.

He used 10-52 gauge Dean Markley Blue Steel strings, although he switched to GHS towards the end of his career. And the picks he used were the 0.60mm thick Dunlop Tortex.

Among the amplifiers he has used is the:

On the subject of distortion pedals he used the:

In addition to using other effects pedals such as:

The boy who was kicked out of the house by his mother, and who literally lived for a few days under a bridge, ended up achieving something that very few have ever achieved. Popularize a minority genre worldwide, not only favoring Nirvana, but the genre in question, and the rest of alternative rock bands.