Richie Kotzen is a renowned American guitarist, who develops his music through the fusion of different musical genres such as Rock, Funk, Jazz, or Blues. Being also a great composer and producer, as well as being an excellent vocalist. 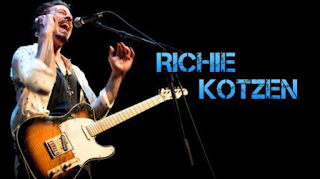 Some guitarists sing, and singers play guitar, but Kotzen does both masterfully. Having a prolific solo musical career, he has also participated in great bands such as Poison, Mr. Big., Or The Winery Dogs.

Starting his career at a fairly early age, turning 30 years as a professional musician in 2019.

Richard Dale Kotzen was born in 1970 in the city of Reading in Pennsylvania. At the age of five, Richie began to play the piano, beginning his taste for the electric guitar at the age of seven, influenced by the band Kiss. Then getting his first electric guitar as a gift from his parents. An inexpensive standard bolt-on neck Gibson Marauder.

Developing as a guitarist quickly thanks to his talent and dedication inspired by guitarists such as Eddie Van Halen, Steve Morse, Jeff Beck, Eric Clapton, or Jimi Hendrix.

Coming to participate at 16 years of age in the band Arthurs Museum, launching with this group the only album ("Gallery Closed") of the band in 1988. Although it would be enough to attract attention as a virtuoso guitarist, offering him a recording contract. record producer Mike Varney, pioneer specialist in the careers of many guitarists in the 1980s.

Releasing his first solo instrumental album at just 19 years old, simply titled Richie Kotzen. Publishing a year later his second album ("Fever Dream") as a soloist, being the first album in which he began to show his qualities as a vocalist.

Establishing himself as a true guitar hero after the publication of his third album (“Electric Joy”). Joining the band Poison in 1991 to replace C. C. Deville, publishing in 1993 an album with the band ("Native Tongue"). Notoriously influencing the guitarist in the sound of the album, contributing his characteristic style as a guitarist, composer, and second vocalist.

But Kotzen would be fired from the group for having a relationship with the band's drummer Rikki Rockett's fiancée. With which he would later end up marrying and having a daughter.

Returning Richie to his solo career, publishing albums at a more or less constant rate of one per year, and collaborating on recordings of other artists such as Glenn Hughes, Stevie Salas, or T.M. Stevens among others.

Collaborating with guitarist Greg Howe in 1995 and 1997 for the release of two Jazz-Rock Fusion studio albums ("Tilt" and "Project"). And with Stanley Clarke in 1999 to create the project "Vertú" together with other musicians, releasing a self-titled album.

That same year of 1999, Kotzen would become part of the Hard Rock band Mr. Big replacing none other than guitarist Paul Gilbert, publishing two studio albums with this group ("Get Over It" and "Actual Size" ), until the band's disbandment in 2002.

Returning again Richie focus on his solo career, although he would never neglect his solo career publishing in 2001 a solo album ("Slow") while he belonged to the band Mr. Big.

Richie Kotzen acquiring a building in 2002 in the city of Los Angeles in which he would build a recording and production studio, where he has edited all his albums since then and collaborated with other figures of Rock and Jazz music.

In 2005, Kotzen would form the short-lived band Forty Deuce with which he would release a single album ("Nothing to Lose"). Continuing Richie again with new solo publications until at the end of 2011 he is contacted by Mike Portnoy and Billy Sheehan for the initiation of a new joint project, the new band meeting in 2012 in Richie Kotzen's studio, the group composing three songs the first day of the start of rehearsals.

Being the beginning of the supergroup The Winery Dogs, publishing in 2013 the first and self-titled album of the band. Releasing in 2015 the group's second studio album (“Hot Streak”), and in 2017 what is so far Richie Kotzen's last solo studio album (“Salting Earth”).

Early in his professional career, Richie Kotzen used a Yamaha SBG2000 that he would receive as a Christmas present in his teens after his parents rightly realized that Richie seemed to be serious about the guitar thing. Becoming his main instrument for several years

Moving on to Superstrat models like the Ibanez RG that appears on the cover of his second solo album. But in the early 90's it would definitely move on to the more popular Fender models like the Stratocaster and Telecaster.

Currently using his custom model Fender FSR Richie Kotzen Stratocaster mounted with DiMarzio single-coil pickups with Alnico V magnets and a mid output that brings the bright and transparent Stratocaster sound, maintaining the sharpness and clarity of each note even in distorted sounds.

Another of his most characteristic guitars is his custom Fender Kotzen Telecaster model with Stratocaster-style recesses in the wood for greater comfort and adaptation to the guitarist, with a Vintage-style DiMarzio Twang King pickup in the neck position, and a DiMarzio Chopper T pickup in position. bridge for more punch of the sound in that position, and with hum cancellation due to its dual coil construction.

Featuring an ash body with an eye-catching flamed maple top, and a practical modern-style brass bridge with individual saddles for each string. One of the most attractive, ergonomic, and functional Telecasters ever created.

Although Kotzen has applied some improvements to this model, installing a selector in the tone control that activates the pickups in series, obtaining a full-bodied sound similar to that of a traditional double coil pickup.

It also features a Hipshot GT2 Electric Xtender tuner to quickly switch from standard tuning to a drop D tuning.

In addition to incorporating a tuner (N-TUNE onboard guitar tuner) that is activated with a small switch located between the volume and tone potentiometers, placing the tuner display below the volume control.

The strings he uses are D’Addario model EXL115 11-49 gauge. A somewhat heavy gauge for long scale guitars such as the Stratocaster and Telecaster

To finger the notes on the guitar, use your fingers directly, abandoning the use of the pick, ensuring that in this way you have a better connection with the instrument.

In the beginning, Richie Kotzen used Laney amplifiers, moving to Marshall amplifiers such as the JCM800 in the early 1990s. In 2005 the British amp company Cornford released the Richie Kotzen RK100 custom model.

Being another of his favorite amp brands, like some Fender models like the Fender Custom Vibrolux and Fender Vibro King, or Victory amps like his Victory RK 50 custom model.

Richie Kotzen is not a guitarist who usually moves with a large arsenal of effects pedals, lately using the Wah Wah Fire Custom Bobber, a custom Tech 21 multi-effects pedal with Booster, Delay, Reverb and Overdrive, and two Footswitches to control the Booster, Reverb, and tremolo from your Victory amp.

Richie Kotzen, despite starting his career at the end of the 80s, and having published more than twenty albums, continues to be in good shape just a few months after the beginning of the third decade of 2000. Preserving an excellent voice, and a powerful guitar, yet warm and elegant.