What Nationality is Slash - The Guitarist Biography 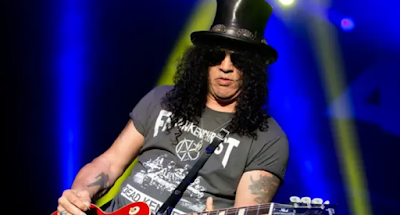 In our last post on great guitarists, we spoke about some of the cool attributes of Bob Dylan, today we are covering a guy who is best known as the long-haired, top-hat-wearing, cigarette smoking lead guitarist for 80′s supergroup, Guns N Roses – Slash. Saul Hudson was born in 1965 in London and was raised in the town of Stoke On Trent in Staffordshire.

He was given the nickname Slash in his young years by one of his friends because he was always on the go and in a hurry.

Slash began to learn the guitar at the age of 11 after his grandmother gave him a new ax that initially had only one string. It wasn’t long until Slash was that engrossed in playing guitar that he would practice for up to 12 hours a day.

Within only a few short years, the name Slash would become a natural word that fell out of the mouth of almost anyone who was talking about the world's best guitarists or talking about guitars in general.

Slash was brought up around musicians and the music industry. His mother was a clothing designer for the likes of John Lennon and also dated David Bowie, while his father did the artwork for record albums, where he provided art for some of the music greats including Neil Young.

For readers out there who don’t know the capabilities of Slash, and why he became one of the worlds, top lead guitarists, check out this video of Slash in action, playing the solo in the song “November Rain” which was voted by guitar world magazine as #6 greatest guitar solo of all time….

Slash And The Road To Guns N Roses

Slash ended up becoming the lead guitarist for one of the biggest rock bands of the century – Guns N Roses. Here is a brief outline of his path to becoming a guitar legend….

“My big awakening happened when I was 14. I’d been trying to get into this older girl’s pants for a bit, and she finally let me come around to her house. We hung out, smoked some grass and listened to Aerosmith’s “Rocks”. It hit me like a f***ing ton of bricks. I sat there listening over and over, and totally blew off this girl. I remember riding my bike back to my grandmother's house knowing that my life had changed. I now identified with something.”…..Rolling Stone Magazine.

In 1983 Slash joined up with his long-time friend Steven Adler and started a band called “Road Crew”. Through the band scene, they hooked up with Axl Rose & Izzy Stradlin. The group of four played in various different rock bands until 1985 then went on the hunt for a bassist by placing an ad in the local newspaper, they ended up finding Duff McKagan and the supergroup Guns N Roses was formed.

In 1988 Guns N Roses achieved their first #1 hit with the classic song Sweet Child ‘O’ Mine, which included one of the most well-known lead guitar soloists of modern history…

After the split of Guns N Roses, Slash has continued to be a highly demanded guitarist around the world, guest-starring for musicians like Iggy Pop & Bob Dylan, he also formed his own bands – “Velvet Revolver” and “Slash’s Snakepit”

Slash with just a few of his many guitars…

Most recently, Slash has been immortalized as one of the characters in “Guitar Hero III: Legends of Rock”. He has also been making guest appearances on “American Idol”, while his band Velvet Revolver searches for a new singer.

How to Read Fingerstyle Guitar Tabs For Beginners