THE EDGE: Biography, Guitars, and Pedalboard

29 Mar, 2021 Post a Comment
The Edge is a musician and composer known worldwide for being the guitarist for the Irish band U2. Being the man responsible for the characteristic sound of one of the largest and most influential Rock bands in history. 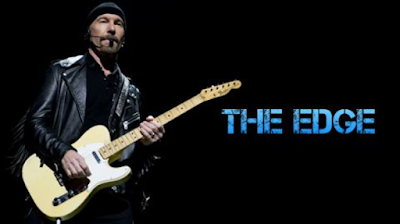 David Howell Evans was born in 1961 in the town of Barking in England, but when he was only one year old, his family moved to the Irish city of Dublin.
Receiving his first guitar as a gift from his mother when he was 9 years old. Being a quiet and lonely boy who did not usually interact with his classmates. Finding his refuge and hobby in his studies and music, beginning to take guitar and piano lessons in his teens.
Turning out to be a good student intending to go to college to become a doctor. Although, as most of the time, things do not always happen as one thinks.

Formation of a New Band

His main partner in artistic hobbies would turn out to be his older brother Dik Evans, with whom he used to play until in 1976 he responded to a note posted on the bulletin board of the institute (Mount Temple Comprehensive School) requesting personnel interested in the formation of a new band.
This ad was placed by another 14-year-old college student who would end up as future U2 drummer Larry Mullen. Entering Dave in the new formation with his brother Dick, and bassist Adam Clayton. Leaving the group Dik Evans shortly after to start other musical projects.
Paul Hewson would also end up auditioning, but ironically, Paul's teenage voice would not be very promising at the time. But the drummer's nose made him decide to introduce him into the group. Thinking Larry that a singer must have charisma and personality and that Paul was leftover.
No one would have imagined at that moment that Paul would later enjoy one of the best voices in all of Rock history.

Creation of the U2 Band

Forming the group called Feedback, beginning the band to interpret themes of the Rolling Stones or the Beatles, renaming the group as The Hype in 1977. But this name did not convince them, definitively calling the group U2 in 1978. It the same name as the American spy plane that could fly very high.
I guess the guys wanted to fly as high as U2 and boy did they get it. But this name can also produce a play on words. Since its pronunciation in English (« You Too «) is similar to the Spanish translation of « You too «.
By that time, Dave was already nicknamed by Bono as " The Edge " (" The Edge ") supposedly because of the angular shape of his face, especially his nose.
At the end of 1980, the band would publish their first album (" Boy ") that would attract attention for its avant-garde air, and for the peculiar, minimalist, and enveloping sound of Evans' guitar.
In 1981 they would publish the album " October " of little success, seeming to deflate the promising ascent of the band. Evans raised shortly after leaving the group, due to religious questions, but his companions convinced him to stay.
Although the guitarist would join in parallel to a religious group called " Shalom ", accompanied in the group by Bono and Larry.
Shortly after Dave would write one of his most famous creations for the band, " Sunday Bloody Sunday ". Included in the 1983 album (" War ") along with another of the group's hits (" New Year's Day ").
At the end of 1984, they would publish a new album (" The Unforgettable Fire ") continuing the level of success of their previous album. But even though U2 was considered one of the most successful rock bands of the 1980s, they had yet to achieve stardom.

The Masterpiece «The Joshua Tree»

Until in 1987, they released the album that would take them to the peak of popularity (" The Joshua Tree "), described by many critics as a true masterpiece.
With stratospheric hits of the group (" With Or Without You ", " Where the Streets Have No Name " or " I Still Haven't Found What I'm Looking For ") where you can perfectly appreciate the minimalist style but at the same time grandiose and surround of the characteristic sound of the band and the guitarist.
U2 has released 14 studio albums so far, the last one at the end of 2017 (" Songs of Experience ").
In 2008, The Edge would participate in a documentary film (" It Might Get Loud ") that examines the history of the electric guitar, focusing on the careers and styles of The Edge, Jimmy Page, and Jack White.
Evans would meet his girlfriend Aislinn in high school, marrying her in 1983 and with whom he had three daughters, dissolving the marriage in 1990.
In 1993 he began a relationship with Morleigh Steinberg, an American professional dancer, and choreographer whom he had met while she was working as a dancer during a television tour, having two children together, the couple getting married in 2002.

The Edge: Guitars, Amps, and Pedals

The assortment of guitars available to the guitarist is quite wide, being very common to use between 15 and 20 different guitars in each concert.
One of his most iconic guitars is the Gibson Explorer, although it is very common to see him with other models such as the Gibson Les Paul, Rickenbacker, Gretsch, Fender Telecaster, or Fender Stratocaster. Using in one of their Strat models, a Fernandes Sustainer pickup for the neck position. Allowing this system to obtain the infinite sustain heard in the legendary song " With Or Without You ".
If you want to know how this type of system works, you can look at the page " Types of pads for a Superstrat " where the operation of this type of pads is explained.
Evans typically uses a wide variety of string gauges depending on each guitar or situation, but he tends to go for the D'Addario brand. And the spikes that usually handle are Herdim Nylon 0.88 mm thick.
Its most iconic amp is the Vox AC30, but it also uses other amps like the Roland JC120 Jazz Chorus, Fender Tweed, or Fender Blues Junior.

Being the only guitarist in the band, he must rely on a wide assortment of effects to develop his sound, and thus be able to optimally fill the entire space:
- Ibanez Tube Screamer TS9
- Electro-Harmonix Big Muff Pi
- Boss SD-1 Super OverDrive
- Electro Harmonix Poly Chorus
- Dunlop Crybaby Wah
- Boss CS-3 Compressor Sustainer.
The Edge's favorite effect is the delay, and the number of times it does without the effect is counted. Using the legendary Electro Harmonix Memory Man Deluxe analog pedal on early U2 records. But by falling a little short in delay time it would go to digital delays like the Line 6 DL4.
The minimalist style of The Edge on guitar playing has influenced countless guitarists. Considering Evans to the notes as something very precious, each one having its meaning and value. Adding that he is a musician. Not a gunman who just throws notes, declaring that this is the difference between what he does, and what others do.