Tom Morello is an American songwriter and guitarist, known for his career in influential bands such as Rage Against the Machine, or Audioslave. Pioneer in novel ways of playing the guitar such as rubbing the hand against the strings simulating the scratch technique characteristic of a DJ. Using to play a pencil or Allen key, or even using the jack plug of the guitar cable. 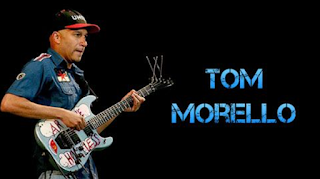 Thomas Baptist Morello was born in 1964 in the Harlem neighborhood of New York, although he grew up and spent his childhood in Libertyville, Illinois.

At the age of 13, he got his first electric guitar, inspired by the music of the group Kiss, beginning to receive guitar lessons. In the first class, they taught him to tune the guitar, and in the second they began to teach him the C scale, and that was it at that time. Leaving the guitar stored in a closet for a long time.

Later he would listen to the "Sex Pistols" and thought that he too could express his feelings and political ideas through the guitar, taking up the instrument.

In 1982 he would finish his high school studies with very good grades, allowing him to study at Harvard University. Where he would begin to practice with the guitar insistently, influenced by bands like Led Zeppelin, The Clash, or Black Sabbath. Forming the band Electric Sheep in 1984 with Adam Jones on bass. Finishing Adam later, being the guitarist of the band Tool.

In 1986 Tom Morello graduated with honors in Political Science from one of the most prestigious universities in the world. Then moving to the city of Los Angeles. Since according to what he said, supposedly that was the place where you had to be to form a rock band.

Starting to teach guitar to survive, until he got a job as the secretary of the senator from California. But he was fired when someone called complaining that some Mexicans were moving into his neighborhood. Tom replied that maybe the problem was not them, but his racist mentality.

Finally, Morello would get to be part of the group called "Lock Up", with which he would publish in 1989, his only album before its dissolution ("Something Bitchin 'This Way Comes").

Rage Against the Machine

After the separation of "Lock Up", Tom Morello thought about forming a new band, impressed by the rapping style of Zack de la Rocha, asking him to join him.

Morello recruiting Brad Wilk as drummer and Zack his childhood friend Tim Commerford as bassist. Forming Rage Against the Machine in 1991, the band released their first self-titled album in late 1992. Listed by many as one of the best Hard Rock albums in history.

The Kings of Rap Metal

Catapulting the group straight to success, reaching number 1 on the Billboard chart. Merging in this album genres as diverse as hip hop and hard rock. Being one of the pioneer groups in the development of the genre known as Rap Metal.

A spirit of protest is reflected in the lyrics of his songs, seasoned with all kinds of bad-sounding words.

This album incorporates one of the group's best-known songs. «Killing In the Name«. The first single from Rage Against the Machine, known as a symbol of the band and for its distinctive guitar riff.

Another of his legendary songs also appears on this album. «Know Your Enemy«. Although this song was never released as a single or music video at that time, this song has become one of the most popular songs of the band.

Until 1996 the band would not release an album again. Evil Empire. With another of his most recognizable hits (Bulls on Parade), reaching number one on the Billboard again.

At the end of 1999, they would publish their third album (The Battle of Los Angeles). Reaching number one on the sales charts. With hits like "Testify", "Guerrilla Radio", or "Sleep Now in the Fire". Fusing the group throughout the 90s different musical genres such as hip hop, rap, funk, punk, hardcore, and hard rock.

Rage Against the Machine split

At the end of the year 2000, the last studio album of the band (Renegades) would be released. Which consisted entirely of covers of songs by other groups. Announcing De la Rocha two months before the publication of this album, his departure from the band, alleging creative differences.

Tom Morello and the rest of the band members would form Audioslave with the singer of the group Soundgarden, Chris Cornell. Moving the style of the band towards Alternative Rock.

Publishing at the end of 2002 the first and homonymous album of the group. Incorporating this album some of the most popular songs of the band such as "Like a Stone" or "Show Me How to Live".

In 2003 Tom Morello would start a solo project as an acoustic alternative country singer-songwriter, known as The Nightwatchman, influenced by artists such as Bob Dylan or Bruce Springsteen.

His lyrics deal with political and current issues, releasing four albums so far under this signature.

In 2005 Audioslave published "Out of Exile". With the hit «Be Yourself«. And in 2006 the band's last studio album (Revelations) would be released, announcing Cornell that he was leaving the group due to irreconcilable personal conflicts, as well as musical differences.

In 2007 Rage Against the Machine would announce their return at the Coachella festival in California. Making different appearances at various festivals.

In 2016 the supergroup Prophets of Rage would be formed, made up of all the members of Rage Against the Machine except for the vocalist Zack de la Rocha, along with other members of different groups. Released in 2017 his first self-titled album.

Although Tom Morello has used a number of different guitar models, one of his most distinctive guitars is the Fender Telecaster "Shining Path" usually tuned to Drop-D.

Another of their most-used models is the Fender Custom Stratocaster "Soul Power" with Fender Noiseless microphones in the center and neck positions and a Seymour Duncan Hot Rails in the bridge position.

But Tom's most famous guitar is the blue Custom with active EMG pickups ("Arm the Homeless") which underwent endless modifications.

If we have a Les Paul style guitar we can achieve this same effect without the need for any type of installation. We simply have to lower the volume of one of the pickups to the minimum, and using the pickup selector will cut the signal, obtaining the same effect.

When it comes to amps Tom has always been very consistent, generally using the Marshall JCM 800 2205.

While Tom uses a heavy load of effects, mostly distortion, his pedal rig isn't too extensive:

This last pedal shifts the guitar's pitch toward the bass or the treble, in steps of a tone, an octave, or two octaves. If we select, for example, an octave, and play a note, when operating the pedal, the Whammy will progressively modify the note until the same note is played, one octave higher.

Tom Morello's political ideas are literally those of a true revolutionary. Transmitting that rebellion through the new sounds extracted from his insurrectionary way of playing the guitar.